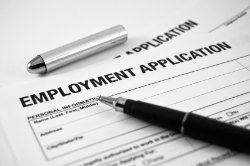 The number of new jobs added in August fell short of analyst expectations, leading some to wonder what this means for the upcoming Presidential election and others to see the news as indicative of a continued sluggish economic recovery. The economy added 96,000 jobs last month; analysts had predicted higher numbers, landing somewhere between 120,000 and 125,000.

"This was not a horrible report," Eric Green, economist at TD Securities, said in an email to clients, according to MarketWatch. "It was, however, a weak one."

Despite the less than desirable figure, however, CNNMoney reported that the nationwide unemployment rate dropped from 8.3 percent to 8.1 percent. However, it turns out this is not the result of more people gaining employment, but rather more people dropping out of the job market -- some 368,000 people, most of them young people, stopped looking for work.

Adding to the disappointment is the federal government's revision of the jobs numbers for June and July, The Miami Herald reported. The two months were revised downward by a total of 41,000 jobs. Furthermore, monthly job growth for 2012 has averaged 139,000 per month, compared to an average monthly gain of 153,000 in 2011, noted MarketWatch. The U.S. needs an estimated 150,000 new jobs a month in order to stay on pace with the increasing population count, according to CNNMoney.

Last month's employment growth occurred in several sectors. New jobs included 28,000 in restaurants and bars (an indicator, notes CNNMoney, that more people have discretionary income to spend in these areas); 27,000 in the professional and technical services; and 17,000 in health care. In all, the private sector added 103,000 jobs to the economy in August, the Miami Herald reported. Offsetting those gains were the job losses: 15,000 in manufacturing and another 7,000 in the government sector.

While economic recovery still appears to be slow, August marks 30 months in a row that businesses have added jobs. On the other hand, August also marks the 43rd consecutive month where unemployment has remained above 8 percent.

"...[T]he truth is, it will take more than a few years for us to solve challenges that have built up over the decades," said the President, as quoted in Forbes.