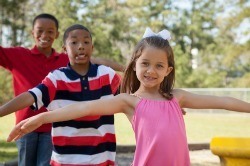 When Facebook COO Sheryl Sandberg was a young girl, she used to run the playground like a Fortune 500 company, organizing and managing the play of others. Her behavior could be seen as an early indication of her leadership prowess, but at the time, she was simply called "bossy." That word -- which Sandberg now calls "the other b-word" -- is so common it may seem benign or even cute. Not so, Sandberg wrote in a recent column for The Wall Street Journal. "Bossy," she argues, can hurts girls and even stunt their leadership potential, and if she had her way, it would be banned altogether. A new campaign aims to do just that.

Sandberg and Girl Scouts USA CEO Anna Maria Chávez have joined forces to launch a new public service campaign called "Ban Bossy," reports ABC News. The goal is to bring awareness to the word "bossy" and its negative impact on girls well into their working years.

"Although the two of us come from different backgrounds, we both heard the same put-down. Call it the other B-word," Sandberg wrote the Wall Street Journal column announcing the venture. "Whether it is said directly or implied, girls get the message: Don't be bossy. Don't raise your hand too much. Keep your voice down. Don't lead."

Sandberg notes that the word "bossy" is almost exclusively reserved for girls; even the Oxford Dictionary defines the word as a "meddling woman." When a boy takes charge in the classroom or playground, she notes, he is seen as a strong leader. When a girl does the same, she is criticized. She suggests this attitude conditions girls to avoid leadership roles, stunting their potential.

Sandberg and Chávez suggested in their column that this sort of demonization of leadership qualities has a widespread societal impact.

Sandberg is quick to note that the Ban Bossy campaign -- and its accompanying website, banbossy.com -- are not meant to encourage rude, mean-girl behavior, reported ABC News. In an interview at Facebook headquarters, she emphasized that leadership is "not bullying" or "aggression," but rather "the expectation that you can use your voice for good."

Sandberg made women's workplace success a social cause, reports NPR. Her book "Women, Work, and the Will to Lead," which she called a "sort of feminist manifesto," encourages women to be ambitious in the workplace and to tackle work-life balance challenges head on.