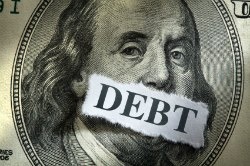 Bryski had been attending the public N.J. college when he suffered a head injury following an accident in 2004. He reportedly lived in a vegetative state the last two years of his life, dying at age 25, according to Philly.com.

The family received news just this week that the loan, provided by KeyBank, would be forgiven. Christopher Bryski's father, Joseph, who had co-signed the loan, has been making monthly payments of several hundred dollars since Christopher's death in 2006.

"It's been kind of surreal," Christopher's brother Ryan Bryski, 34, told Philly.com. "We can't even believe it."

Without Ryan, the debt might not have been forgiven. Last week, he launched an online petition to draw attention to the loan and to seek support for its forgiveness, reported Inside Higher Ed. This was after his father came out of retirement in order to pay Christopher's bills and following continual failed negotiations with KeyBank officials to seek forgiveness.

"When Christopher died, my family didn't just lose a loved one -- we inherited debt for an education that will never be used," Bryski wrote on the petition, as quoted by Inside Higher Ed. "[E]very month, we're reminded of my brother's death in the worst way every time dad puts a check in the mail to a heartless bank."

By early this week, nearly 75,000 people had signed the online petition. KeyBank officials began calling the family to see what could be done, Philly.com reported, and eventually decided to forgive the debt. Inside Higher Ed reported that approximately $30,000 was still due.

"They said, 'Effective immediately the remaining balance is forgiven,'" Ryan Bryski told Philly.com. "'We don't want to put you through any more hardship.'"

While the federal government cancelled a $5,000 student loan debt for Christopher following his death, not all private institutions have similar policies. Some, such as Discover Financial, Sallie Mae, and Wells Fargo, do, noted The Huffington Post. In these cases, typically, a death certificate is sufficient to discharge a loan after death. Other lenders may choose to consider loans on a case-by-case basis while still others, like KeyBank, seek payments from co-signers.

In fact, federal bills are currently pending in both the House and Senate proposing that lenders make clear their policies regarding the death of a signer. The drafted bills are being referred to as the Christopher Bryski Student Loan Protection Act, but are stalled in Congress, Philly.com reported.

"My father tried for years to get KeyBank to forgive my brother Christopher's loans after he died, and for years they ignored us," Ryan said in Inside Higher Ed. "Thankfully, they couldn't ignore the 75,000 people who signed our petition. It's sad that it took so much to finally get a response, but my family and I are just so grateful that it worked."