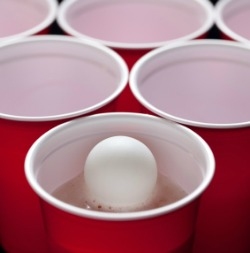 Further results showed that the highest levels of bacteria were on balls used in outdoor beer pong games. For those unfamiliar with beer pong, it is a game that often involves bouncing balls on a surface into cups or glasses of beer and then drinking the liquid contents. The study suggests that anyone who plays beer pong could become ill, noted Paul Dawson, Clemson's professor of food, nutrition and packaging sciences and team leader of the Creative Inquiry program group that researched the issue, according to Patch.com.

"There are bacteria in the environment that can make you sick," he told Patch.com. "Ninety percent of bacteria are probably harmless, but by virtue of sheer numbers, you're taking a chance of getting sick."

Students collected ping-pong balls from various settings for the study, including both indoor and outdoor areas as well as different types of surfaces, such as carpet, vinyl and wool, reports The Tiger News. One ball was even retrieved from dirt while another was taken off a wooden stoop, the paper reports. Students then determined the amount of bacteria on each ball by observing colony growth, the approach advised by Dawson.

Students found the the ping-pong balls with the most significant levels of bacteria were those from the outdoors. One examined outdoor ball hosted 3 million bacterial cells. By comparison, those ping-pong balls used indoors had much less bacterial contamination. The fewest numbers of bacteria, at about 1,000 cells, were found on a ball taken from a carpeted surface.

A second prong of the study determined how much, if any, bacteria wound up in beer that could be consumed during a game. To determine this, students put a nonpathogenic E. coli strain on the balls and, in a beer pong simulation, tossed them into beer-filled cups. Findings revealed that most of the bacteria on the ping-pong balls transferred to the beer, although the quantity varied depending on the environment in which the balls were used.

For a safer version of beer pong, The Daily Meal proposed using water in the glasses into which the balls are bounced, and then chugging one's own beer from one's own cup. Another solution, although untested, might be rinsing off the balls between tosses.