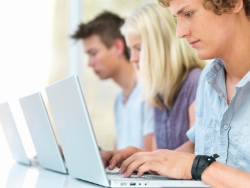 The incoming freshmen class will be armed with their laptops, tablets and smartphones and are the first generation to grow up entirely online. These and other tidbits are part of Beloit College's annual Mindset List.

According to The Mindset List website, the list began in August 1998. Created by Beloit's former Public Affairs Director Ron Nief and Keefer Professor of the Humanities Tom McBride, the idea was to provide a list of the topics, worldviews and cultural phenomena that shaped the lives of each incoming freshmen class so that faculty could avoid outdated references. Eventually, it also became something like a time capsule, capturing moments in the rapidly changing environment of each generation.

"I distributed the list to first year faculty, reminding them that their students are probably not familiar with what for example Watergate," explained McBride to the Beloit Daily News. "It doesn't mean you shouldn't have them study Watergate, but you can't just bring it up and expect the students are going to have a frame of reference... if you want to spend your time talking about Watergate and using those analogies you need to be aware that you are going to have to explain it."

Indeed, The Chronicle of Higher Education pointed out that most of the entering class of 2015 was born in 1993, the same year Time magazine called the Internet "the place to be". It was also the year the New Yorker published its most reproduced cartoon ever--the one with the caption, "On the Internet, nobody knows you're a dog" by Peter Steiner. As the website noted, this cohort knows former president Bill Clinton, but not George Herbert Walker Bush. They break up with significant others via text message or Facebook. Their parents have always been able to create a will or other legal document online. And they have no idea "where everybody knows your name".

As a press release noted, faculty often feel out of touch each year the new list is released. However, the Beloit Daily News reported that the list is supposed to be a tool to help professors draw connections, which can be difficult in today's world of information overload.

"It isn't so much what students know, but what they can put in context in relation to today's events," said McBride. "The educator's problem is separating information from knowledge, knowledge from context and context from wisdom."

According to the website, this list inspired Nief and McBride to release the book The Mindset Lists of American History: From Typewriters to Text Messages, What Ten Generations of Americans Think Is Normal (Wiley and Sons).