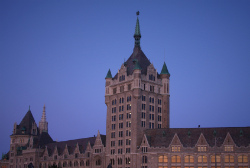 On Thursday, New York's Governor, Andrew Cuomo, introduced legislation that would allow all State University of New York (SUNY) college campuses to raise tuition sharply for an estimated 175,000 students. According to The New York Times, Cuomo's proposal would increase in-state undergraduate tuition by as much as 5 percent each year over the next five years at non-research campuses, and as much as 8 percent annually at research campuses in Albany, Buffalo, Binghamton and Stony Brook.

Cuomo believes the legislation would balance out what he sees as rock-bottom tuition rates that could limit the state's universities from serving students well. "We're wrestling with balance," Mr. Cuomo said in a meeting with officials from Stony Brook University. "We'll keep tuition as low as possible, yes. But at one point you may degrade the institution that the students are attending, and that's a reality point that I think we have to come to terms with."

The bill has drawn approval from SUNY presidents, union leaders and administrators, notes the TimesUnion.com. UAlbany President George Philip issued a news release that included more than 30 statements of support from local politicians and business leaders. The Democratic governor's proposal has also even gained support from Senate Republicans. "We believe it's essential that SUNY be given the flexibility it needs to continue to grow, create jobs and help revitalize our local and regional economies," said Scott Reif, a spokesman for Senate Majority Leader Dean G. Skelos of Long Island.

However, not everyone supports the proposal. The New York Times reports that Senate Democrats worry that the tuition hikes could make SUNY inaccessible to low income students. "That is a failing," said Senator Toby Ann Stavisky of Queens, the senior Democrat on the Senate Higher Education Committee. "We're making higher education less affordable and less accessible."

As reported by BuffaloNews.com, Cuomo argues that his plan shelters many low income students from the hikes: students who qualify for the maximum award under the state's Tuition Assistance Program would be exempt. He also stresses the regular hikes would actually decrease the student burden over time as previous, less frequent increases have amounted to an average of 6.7 percent per year, more than the annual 5 percent proposed. "This bill brings rationality to the SUNY tuition system by allowing students and parents to reasonably plan for college expenses, instead of being subject to dramatic tuition increases and uncertainty," said Cuomo.

This final note won the approval of the SUNY student government as well, which says it supports the proposal so long as the funds benefit only the SUNY system and not the general fund as they have in the past. "We applaud the governor's effort to end the harsh tuition spikes that have been detrimental to SUNY's accessibility," said Student Assembly president Kaitlyn Beachner as reported by the New York Times.

BuffaloNews.com reports the SUNY deal will not be final until Cuomo and lawmakers agree on both the amount and duration of tuition hikes, plus language guaranteeing campuses get to keep tuition hike proceeds.