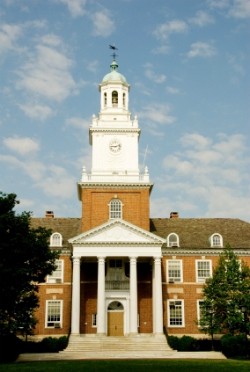 It pays to have highly-successful alumni graduate from your college. Such is the case with New York Mayor Michael Bloomberg and his alma mater Johns Hopkins University.

On Thursday, Bloomberg, 70, was on hand at the Baltimore school to help dedicate its new $1.1 billion hospital. The Charlotte R. Bloomberg Children's Center, which comprises a part of the new hospital, was named after his late mother, according to the Wall Street Journal. That center features a total of 205 rooms including 10 surgical units and a 45-bed neonatal intensive care unit.

"We are fortunate that generous visionaries from across many communities shared and helped us achieve our vision for a new environment of care for the 21st century," Ronald R. Peterson, president of the Johns Hopkins Hospital and Health System, was quoted in the Baltimore Sun as saying.

The new hospital should give the 136-year-old school many modern health care amenities, according to the Baltimore Sun.

"One of the limitations we had in our old buildings was, frankly, they were designed at a time when X-ray was considered state-of-the-art technology," Hospital Spokesman Gary Stephenson said in a WBALTV article. "No one had envisioned things like magnetic resonance imaging or computer tomography. These buildings are designed to accommodate technological advances."

However, it's Bloomberg's spirit of generosity to the school following his graduation with an engineering degree in 1964 that is impressive. His mother, who died at the age of 102 last year, is thought to be an inspiration behind his giving. In fact, it was in 1984 when his mother turned 75 that he gave his first name-giving donation of $1 million to the school, according to The Chronicle of Higher Education. His donation for the newly-dedicated hospital totaled $120 million, bringing his total gift-giving to John Hopkins to the $800 million level and making him the school's all-time high donor.

Some wonder about potential donations when his 50th year reunion arrives in 2014.

As a matter of fact, Bloomberg ranked fifth on last year's Chronicle of Philanthropy's list of most generous donors. Although there are other philanthropists who have also given substantially to their alma maters, Bloomberg is undoubtedly near the top, the Chronicle of Higher Education notes.

Bloomberg served on Johns Hopkins school board of trustees from 1996 to 2001. He noted that it was while serving that he gained a deep appreciation for the function and importance of public health.

"I found that it was easier to prevent what makes people sick then to try and cure then and keep them from dying," he stated in the Baltimore Sun. "I saw what the school of public health did, and the medical school and the school of nursing, and I took pride in it."