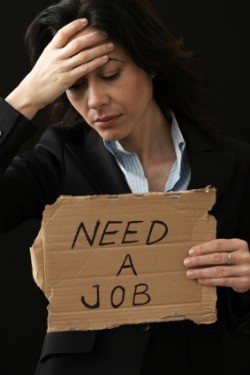 Today's report from the Bureau of Labor Statistics painted a disheartening picture of the U.S. economy: It indicated that no new jobs were added in August, and the unemployment rate remained at 9.1 percent--the same level as last month. The rate has shown little change since April.

The report, which was the worst reading in a year, noted that there are 14 million people who are presently without work. The figures also showed a drop in information jobs of 48,000, primarily as a result of striking Verizon Communications Inc. workers.

"This is further evidence that the economy is very close to stalling if not having stalled," said Nariman Behravesh, chief economist at IHS in Lexington, Massachusetts, who was quoted by Bloomberg.

Other financial experts echoed their discouragement. "The heightened market volatility has led businesses to question the durability of the recovery," commented Doug Duncan, chief economist at the housing finance agency Fannie Mae, who was quoted by the Los Angeles Times. "More firms will likely stay on the fence with regard to future hiring, increasing the chances of outright job losses in coming months, and putting the odds of a recession in the coming year at a coin toss."

Particularly troubling about the new BLS jobs report is that about 6 million of the unemployed, or nearly 43 percent, have been unemployed for six months or longer. Experts have pointed out that the longer people are unemployed, the less likely they are to find a new job.

"After a long period of unemployment, affected workers may become effectively unemployable," noted economists at the Richmond Fed in a paper that was quoted by National Public Radio. That's because the skills of unemployed workers can become outdated, and because employers are reluctant to hire someone who has been out of the workforce for so long.

People, said Bart Hobjin, an economist at the San Francisco Fed who was quoted by NPR, "are simply flowing into unemployment and not finding jobs. That's the overall weakness in the economy."

Meanwhile, the underemployment rate--which reflects part-time workers who would prefer to be working full-time and people who would like to work but have stopped looking--increased from 16.1 percent to 16.2 percent.

"Economic growth has, for the most part, been at rates insufficient to achieve sustained reductions in employment," said Federal Reserve Chairman Ben S. Bernanke, who was quoted by Bloomberg. "It is clear that the recovery from the crisis has been much less robust than we had hoped."