BLS: Unemployed Give Up After 5 Months Of Job Hunting 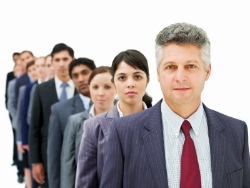 A report from the U.S. Bureau of Labor Statistics (BLS) shows that it takes job seekers double the amount of time to find a job or give up looking for work than it did before the recession hit in 2007.

Using data from the Current Population Survey (CPS), BLS measured the average and median number of weeks that the unemployed looked for work before finding a job or before dropping out of the labor force. As Randy Ilg, an economist in the Division of Labor Force Statistics, pointed out, the measures showed that "the recent recession has had a profound effect on the length of successful job search".

The Wall Street Journal reported that the jobless spent approximately 20 weeks, or 5 months, looking for work before giving up in 2010, which is up significantly from 8.5 weeks in 2007. Job seekers who were able to find a new job last year spent a median of 10 weeks job hunting, compared to five weeks in 2007. BLS also noted that in 2007, 49 percent of the unemployed were able to land a job within five weeks and less than three percent who found a job had been unemployed for more than 52 weeks. In 2010, however, just 34 percent of jobless found a job within in five weeks and 11 percent had been unemployed for more than a year.

Furthermore, The Wall Street Journal noted that labor force participation, or the share of Americans either working or looking for employment, has dropped to its lowest percentage in nearly three decades.

According to Bloomberg, those that stick it out and continue the job hunt are facing some fierce competition. With 13.8 million unemployed Americans in the month of April, there were 4.6 people for every job opening, up from approximately 1.8 in December 2007. And, in more discouraging news, U.S. job openings seem to be decreasing--the number of open positions fell by 151,000 in April, the fewest openings since January.

Although long-term employment obviously has negative side effects for the jobless, The Wall Street Journal noted that it also takes a toll on the economy in other ways, such as a loss of goods and services that would have been produced if the jobless were employed as well as spending that would have come from their paychecks.

"How long before the unemployed find jobs or quit looking?" bls.gov, May 2011, Randy Ilg

Career and Education News
Home >
News>
BLS: Unemployed Give Up After 5 Months Of Job Hunting