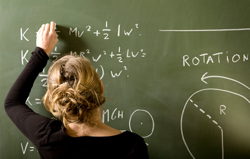 High school students may find it more difficult to get into a public university in Massachusetts. According to The Boston Globe, the state Board of Higher Education voted unanimously on Tuesday to require four years of math in order to gain admission to one of Massachusetts' nine state universities or the UMass system.

As SouthCoastToday.com reported, high school students are currently required to take three years of math. The new mandate requires that students take Algebra I and II and geometry or trigonometry or comparable. Additionally, one math course must be taken during their senior year.

"Students entering our state universities and UMass need to be prepared for a rigorous academic experience," explained Charles Desmond, chairman of the Board of Higher Education.

The new requirement is an effort to boost college completion rates as well as prepare low-income students for the rigors of college curriculum. It will go into effect for college freshmen in fall 2016, which gives colleges a chance to adjust admissions policies and high schools time to hire and train more teachers.

While many saw the change coming, some are still concerned about the consequences the requirement may have, reported The Republican.

"I hope it will not place schools once again in a position where they have to chop art and music to free up the money we need," said Rege.

Similarly, Holyoke Superintendent David L. Dupont pointed out that some students may be interested in a field that does not have an emphasis on math so the new mandate may cause some to sacrifice other necessary classes.

"We may be cutting their opportunities in social studies and art and music, and that bothers me," said Dupont.

"Students need to be comfortable with math and new sciences, so we have to prepare our own students," said Dr. Barry Rabinovitch, superintendent of schools, to SouthCoastToday.com.