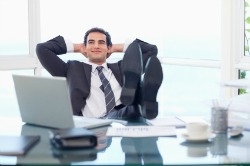 Facial expressions and posture can say a lot about what a person is thinking or feeling. One Harvard Business School professor, however, says that body language is more powerful than that--it may even change how you see and feel about yourself, particularly in the workplace.

We're all familiar with how a leader looks--he or she typically stands tall and straight rather than hunched over and small. According to Life Inc., Amy Cuddy, a professor and researcher at Harvard Business School, refers to that kind of posture as "power posing" and says that it can actually make you more powerful and successful.

"...[W]e make sweeping judgments and inferences from body language. And those judgments can predict really meaningful life outcomes like who we hire or promote, who we ask out on a date," said Cuddy at a TED conference.

In an interview with Inc., Cuddy explained that she observed a gender grade gap among her MBA students where men tended to participate more and, therefore, outperform women. One thing she noticed was that male and female students had very different postures--women usually had their legs crossed or ankles wrapped. Men, on the other hand, were more spread out, with their arms open or draped over the seat next to them. Cuddy hypothesized that forcing students to carry themselves more confidently would give them a sense of power, which in turn would make them more successful inside and outside the classroom.

"...[I]t seems that our nonverbals do govern how we think and feel about ourselves, so it's not just others, but it's also ourselves. Also, our bodies change our minds," said Cuddy in the TED talk.

As Cuddy pointed out in her TED talk, this knowledge can be useful in the workplace. For example, if you are preparing to pitch an idea or get on an important sales call, you can prep yourself mentally by performing high-power poses before show time. It can also help when interviewing. While waiting, instead of hunching over to review notes or playing with your phone in the lobby, Cuddy recommends doing some power poses in the bathroom.

While some may be concerned that this is simply "faking it", both Cuddy and Sims Wyeth, a speech coach with Sims Wyeth & Co, offered reassurance.

"It's not faking it," said Wyeth in Life Inc. "It's really you, but it's an unfamiliar you that you start to understand."

"Amy Cuddy: Your body language shapes who you are," ted.com, October 2012