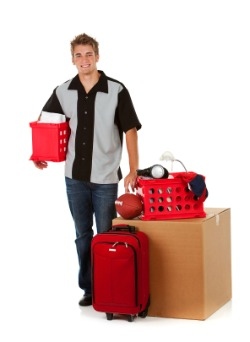 More college graduates than ever are being forced to move back home with their parents because they simply cannot afford to live on their own. Experts are noting that the situations of these so-called "boomerang kids" are negatively impacting their own development as well as the economy.

As reported by the Chicago Sun-Times, a U.S. Census Bureau analysis released this month found that nearly 20 percent of young men in their mid-20s through mid-30s are moving back home with their parents or have never left. The report, called America's Families and Living Arrangements: 2011, noted that the one-in-five figure was the highest level since 1960. Women appeared to be managing somewhat better: Only 10 percent of females in the same age group were living at home with their parents.

"Every parent I know is dealing with this," said Judy Brown, of Gary, Indiana, whose son Frederick moved back home during his senior year of college. "We're spending all this money for college," she told the Sun-Times, "and they can't even find a job."

Such a living arrangement can be unhealthy for both kids and their parents, said Dr. Martin Drell with the Louisiana State University Health Sciences Center, who was interviewed by WWL in New Orleans. "Anything that happens during a stage in which you were supposed to move out in which something happens and you had to move back in, there is usually an increase in risk for problems," he noted.

He added that he is somewhat less concerned about such situations now, because they are far more common. Still, he said, moving back home "is really a change in the development course of kids their age."

Moreover, the decrease in new households is ultimately having a negative effect on the economy as a whole. Mark Zandi, chief economist at Moody's Analytics, estimated in The New York Times that each new household adds about $145,000 to output that year as the spending ripples through the economy. But last year, just 950,000 new households were created, compared to 1.3 million new households that were formed in 2007. Less new households, explained Zandi, translates into less economic growth.

"Increased housing demand definitely has multiplier effects throughout the economy," agreed Gary D. Painter, a professor at the University of Southern California and director of research for the school's Lusk Center for Real Estate, who was quoted by the Times. "We have these sort of missing potential households," he said, which consequently means less jobs in retail, construction and manufacturing.

Zandi predicted, however, that the number of households will increase once the economic situation improves. "Once we get a little bit of job growth, or even expectations of better job market, those households are going to start breaking apart pretty fast," he told the Times. He estimated that there is a pent-up demand for about 1.1 million new households.