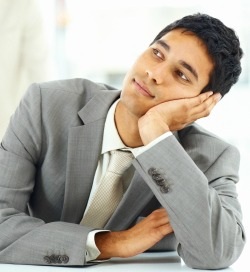 Daydreaming in the workplace may be more likely to earn one the reputation of a slacker than of a creative genius, but new research suggests the latter may be more fitting. According to Today, a new study presented last week at the Annual Conference of the British Psychological Society Division of Occupational Therapy finds that boring, monotonous tasks may actually help workers become better, more creative problem solvers.

"Boredom has always had such bad press, but some boredom is possibly good ... especially if it gives us the opportunity to daydream," study co-author Sandi Mann, senior psychology lecturer at the University of Central Lancashire in the U.K, told Today. "Being able to have that down time when you let your mind wander can be great for creativity."

Science Daily reported that the researchers conducted two studies. In the first, 40 people were asked to carry out the boring task of copying numbers out of a phone directory for 15 minutes while another 40-person group did not. Participants were then asked to come up with unique uses for a pair of polystyrene cups, a task requiring creativity. The result: Those 40 people tasked with boring work displayed more creativity than those who were not.

According to Medical Daily, researchers then conducted a second test that compared the extent to which mundane work might spark one's creativity. In the second run, half the participants were once again asked to copy telephone numbers from a directory while the other half simply read the numbers, which allowed for even more daydreaming. Once again, participants performing the most mundane task -- reading telephone numbers -- displayed more creativity on the subsequent challenge.

"Once we're allowed to daydream, our heads are free to think in different ways," Mann told Today, noting that daydreaming, a mental state in which the brain attempts to self-stimulate, can lead to more creative problem solving.

Today reports that the research follows another major study published in 2010 that suggests Americans are becoming less creative. According to that study, which was conducted by a professor at the College of William & Mary's School of Education , Americans' performance on creativity analyses has been waning for more than 20 years even as IQ scores are climbing. Experts say that one possible reason for this decline in creativity is the increased stimulation technology provides. Our smartphones are entertaining us more and our minds are wandering less, which could interfere with creative thinking. If we allowed ourselves to become bored, we might recapture some of that creativity.

Executive Coach Lisa Garcia Jacobson warns readers in Today that while daydreaming at work could boost creativity, many bosses may not view it in a positive light.

"You can't stare off into space at meetings or otherwise visibly display your boredom," she said. "[You] have to practice it in a focused way."

"Being Bored at Work Can Make Us More Creative," sciencedaily.com, January 9, 2013