Boston College Attempts to Shut Down Condom Giveaways on Campus 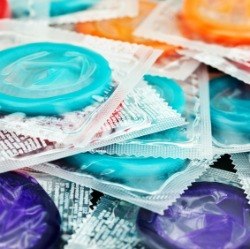 Boston College administration has threatened disciplinary action against a student-run organization if it doesn't stop passing out condoms on campus, The Boston Globe reported. According to the college, providing condoms to students violates school policy because Boston College is a Catholic institution. Subsequently, an American Civil Liberties Union attorney said the group would sue BC for violating the students' civil liberties if it did not retract the threat.

Boston College Students for Sexual Health (BCSSH), a group that aims to bolster sexual health education and resources, isn't recognized by BC. The organization sponsors student-run Safe Sites, which are 18 mostly on-campus places such as dorm rooms where students can obtain safe sex information along with lubricant and condoms for males and females, USA Today indicated.

On March 15, BCSSH received a letter signed by BC's Dean of Students Paul Chebator and George Arey, director of residence life, demanding that students end Safe Sites due to their view that handing out of condoms diverges from the students' "responsibility to protect the values and traditions of Boston College as a Jesuit, Catholic institution," The Globe explained. The letter further read, "While we understand that you may not be intentionally violating university policy, we do need to advise you that should we receive any reports that you are, in fact, distributing condoms on campus, the matter would be referred to the student conduct office for disciplinary action by the university."

According to New York Magazine, other Catholic colleges and universities have voiced their support of BC, including Providence College, Holy Cross, Notre Dame, Georgetown, the University of Dayton and Stonehill University. Officials said their schools also prohibit on-campus condom dispensing, which could result in the disciplining of those students doing so.

Sarah Wunsch, staff attorney for the ACLU of Massachusetts, threatened BC with a legal battle if school officials persist, as she believes their actions are illegal, The Boston Globe reported.

"I am very disturbed, and the students have rights that are at stake here," she told The Globe. "We're up to a fight if they are up for a fight, but we'd rather not fight about this."

To date, BC students haven't ceased and will continue their operation, said Lizzie Jekanowski, a chairwoman of BCSSH and a BC senior majoring in political science. The group has meetings scheduled in late April with six directors of various BC administrative offices.

Jekanowski said BC administration has known for some time about Safe Sites, which always has been transparent with them, but had never done anything about it. She wondered why school officials hadn't contacted her group directly before issuing their written, cease-and-desist document.

"We were very disappointed that the signatories of the letter never contacted us beforehand," she said. "We've had a very open relationship, and it's been very positive. This letter was very war-mongering and threatening."

In their turn, Boston College has released statements of its own. According to The Boston Globe, BC spokesman Jack Dunn stated in an email, "As a Jesuit, Catholic university, there are certain Catholic commitments that Boston ­College is called to uphold. [...] We ask our students to respect these commitments, particularly as they pertain to Catholic ­social teaching on the sanctity of life."