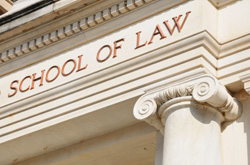 Another frustrated student publicly announced his dissatisfaction with law school. According to the Boston Herald, an anonymous Boston College Law School student posted an open letter to George D. Brown, the school's interim dean, offering to leave law school in exchange for a tuition refund.

The letter was posted on EagleiOnline, the Boston College Law School student newspaper. Although the third year student's name was redacted, the story is not unheard of. In August a number of bloggers, including "Ethan Haines", made headlines when they expressed their anger towards deceptive law schools. Like many other dissatisfied customers, BC's anonymous student described his frustrations with a dismal job market on top of mounting law school debt. His is also expecting his first child in April and is worried about how he will provide for his family. "With fatherhood impending, I go to bed every night terrified of the thought of trying to provide for my child AND paying off my J.D, and resentful at the thought that I was convinced to go to law school by empty promises of a fulfilling and remunerative career," he wrote.

The Boston Herald reported that tuition and housing at BC Law School costs nearly $60,000 a year. WalletPop pointed out that, according to US News & World Report, 2009 Boston College Law School grads owed an average of $96,806, while the Bureau of Labor Statistics showed the median salary for graduates nine months after graduation as $68,500. Additionally, BLS data showed that the legal sector lost more than 22,000 jobs in the past year and Glenn Reynolds, University of Tennessee law professor and instapundit.com blogger told the Boston Herald that the job market for law students has weakened considerably over the last few years, particularly in the Northeast and on the West Coast.

Like many other law students and recent graduates, BC's student wrote that he and his peers are "discouraged, scared, and in many cases, feeling rather hopeless..." So he proposed a solution: "I am willing to leave law school, without a degree, at the end of this semester. In return, I would like a full refund of the tuition I've paid over the last two and a half years."

As WalletPop pointed out, many students and lawyers understand the plight of law school students, but some argued that the BC student should have had a more realistic view. Cornell Law School professor and legalinsurrection.com blogger William Jacobson told the Boston Herald, "I doubt [the school] guaranteed him a particular job or level of income upon graduation, so I don't see what his claim would be". Reynolds also questioned, "Can somebody actually get a refund for their tuition money?"

Although the student argued that the proposition would help BC's rankings--since it would not have to report another graduate's unemployment--the school is not convinced. "What we can do is provide the best education possible, and work together to provide as many career opportunities as possible," said the school in a statement.

Despite all the negative publicity, WalletPop noted that many still view a law degree as a "golden ticket to prosperity". The National Law Journal, reported that "a handful of law schools saw their applicant pools swell by 30 percent or more" despite discouraging job statistics.