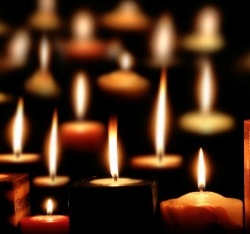 As the city of Boston mourned the victims of Monday's bombing, Boston Magazine reported that Boston College students showed solidarity by organizing a walk in support of the victims to be held this Friday. Event organizers, comprised of students from Boston College, named the walk "The Last 5" to signify the last five miles of the race. According to Mashable, 5,742 of the 23,326 race participants were unable to finish the race due to the blasts.

Unfortunately, plans for the walk were cancelled Wednesday due to concerns for Boston's already exhausted police force. Instead, organizers of the event and Boston College students plan to hold a 4 p.m. Friday vigil at the school's O'Neill Plaza to remember those who lost their lives as well as those who were injured, according to the event's "The Last 5"'s Facebook page.

"Out of respect for the City of Boston and the Boston Police Department, the walk originally scheduled for this Friday will be postponed to a date in the future that is more appropriate and conducive to this type of an event," said Boston College student and event organizer, Dani Cole, on the event's Facebook page. "... We encourage other universities in the Boston area, and across the country, to hold vigils at this time in a gesture of solidarity."

According to We Love Beantown, more than 16,500 supporters had planned to walk in the symbolic event. Those who still want to participate will likely be able to as plans to reschedule "The Last 5" are already in the works. Event organizers reassured disappointed event-goers that the walk will still go on.

"At the appropriate time and in concert with the City of Boston, we plan to hold the Boston Marathon: The Last 5 event," Cole said.

For now, mourners are encouraged to attend Friday's vigil and look for other ways to show their support. We Love Beantown reports that those who want to help can donate to One Fund Boston, which was formed to help those affected by the tragic events that took place. They also report that an additional observance - Boston Marathon, A Candlelight Vigil - is being held this Saturday at 9 p.m. That event's Facebook page suggests that those who want to participate can light a candle "ANYWHERE; that's its brilliance. Your house, apartment, place of work, green space at school, stationary and secure locations, or if some are up to it, take a walk with friends along boston [sic]."

More details on when "The Last 5" will take place are expected to be released as local authorities take time to finish their investigation. Event organizers are certain that the event will eventually occur. Mourning students and city residents likely will look for ways to gain closure from the shock of Monday's events.

"Our motto remains: we decide when our marathon ends," Cole said on "The Last 5"'s Facebook page.