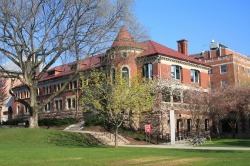 With the City of Providence, R.I. in financial straits, Brown University has agreed to step up and help fill in some of the budget gaps with millions of dollars in payments.

Brown University, an Ivy-league school founded in 1764 and located in Providence, plans to give $31.5 million to the city over the next 11 years, according to The Chronicle of Higher Education. Already, the university has been giving the city about $4 million annually. The additional pledge means the school should be sending the city nearly $3.9 million extra per year (amounting to $7.9 million total per annum) over the next five years, and then an extra $2 million annually from 2017-2022.

"Brown continues to be deeply concerned about Providence's financial situation and is committed to supporting efforts to enhance the city," Brown University President Ruth Simmons said in GoLocalProv. "The most significant role that Brown can play in contributing to a stronger Providence and Rhode Island is to continue to improve as an internationally renowned research university."

The additional monies to Providence came following some tough negotiations between the Brown University president and Providence's city mayor. The Chronicle reports that the arrangement took "many months to hammer out." Of note, is that the university has $1 billion worth of property located in the city and also has a $2.5 billion endowment, according to Reuters. However, because of its non-profit status, Brown University is exempt from paying many forms of property taxes, which would benefit the city.

This has brought new discussion to the table about how non-profit institutions like Brown University should contribute to the cash-strapped cities they might be located in. The issue came to light two years ago in Pittsburgh when that city's mayor proposed a 1 percent tuition tax on students at schools to help offset city budget shortfalls, The Chronicle reports. Reuters also indicates that cities such as Boston and Chicago have sought to raise money from non-profit institutions recently by looking at additional funding through PILOTS, or payments-in-lieu-of-taxes, programs.

"During this challenging period, the relationship of nonprofit institutions to their municipalities has been much debated not only in Rhode Island but also around the country," said Simmons in a letter released after the announcement.

The city had been looking at bankruptcy, according to its mayor, Angel Taveras. Earlier this year, he indicated that Providence had a $110 million budget shortfall, according to Reuters. However, since that time, budget cuts and tax increases have decreased that difference to approximately $22 million. Some of those cuts include suspending cost of living increases for employee pensions, letting go of some 200 employees, and having teachers, firefighters and police take lower salaries or benefits.

Taveras has been in talk with other institutions in Providence as well. The Chronicle reports he just reached an agreement with Lifespan, an area hospital system, that results in $800,000 annually to the city over the next three years. Johnson & Wales University, which offers associate degrees to graduate level training, also has agreed to give as much as $11.4 million to the city over the next decade. GoLocalProv reports that Taveras is also looking to secure agreements with more nonprofit institutions located in the city.

Brown University will also benefit from a few incentives which were included in the agreement. According to Reuters, the school will receive an additional 250 parking permits and take ownership of several streets located around the school that were previously owned by the city.

The agreement with Brown University needs to be approved by the city council.