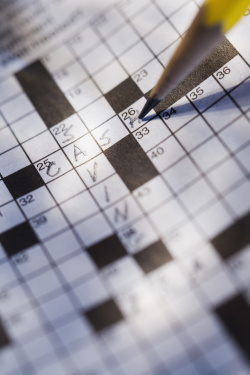 This week, six Brown University students will join the ranks of The New York Times published. Each day through Saturday, one of their original crossword puzzles will debut in the Arts section, per WPRI.com. Along with appearing in the paper's print editions, they will also be posted online for nytimes.com subscribers.

"The quality of the puzzles is just as high as in any other week, and I wouldn't have published them otherwise," says Will Shortz, crossword editor for The New York Times and puzzle master for National Public Radio's Weekend Edition, reports the Chronicle of Higher Education.

According to The Brown Daily Herald, the following students will have their crossword puzzles published: Aimee Lucido, Eshan Mitra, Zoe Wheeler, Joey Weissbrot, Jonah Kagan, and Natan Last. All belong to Brown's two-year-old Puzzling Association, a group of about 30 students who get together weekly to devise, solve, and discuss puzzles.

For one week every September, Shortz selects and publishes crossword puzzles that fit a theme he's concocted. Last year's theme was Half-Century Puzzlemakers' Week, during which each published crossword was developed by someone who'd published one at least 50 years earlier. This week's theme is Brown Puzzlemaker Week, a first for any college or university attendees. Shortz selected Brown over other schools with crossword clubs, like Harvard, Yale, and Princeton, because its group contains the most members who've had grids published in The Times previously.

The six are diverse in their studies and crossword publishing experience. Lucido, a computer science major, contributes crosswords to The Brown Daily Herald, the university's newspaper. Weissbrot, who's studying classics, already had a puzzle run in The Times. Last has had 11 puzzles appear in The New York Times and served in the past as an intern for Will Shortz. It was Last who approached Shortz with the idea for Brown Puzzlemaker Week.

The students all agree, however, that creating puzzles takes a mathematical mind and a passion for language and peculiar facts. In terms of compensation for their puzzles, the student are definitely not doing it for the money. The Chronicle of Higher Education reports that the New York Times pays $200 for a weekday crossword puzzle and $1,000 for a Sunday one. According to Last, a puzzle can take months to create.

The Brown scholars also take pleasure in using references and material for clues that are more current than what is traditionally used. For example, creating clues on topics such as "The Simpsons" and Harry Potter, reports The Brown Daily Herald. "Constructing is a great way to get back at the crossword world for all those years," Kagan says.

Shortz wants to keep publishing teens and young constructors, he says. "I'm expecting people to think that, A, this week is cool and, B, these are really nice puzzles."