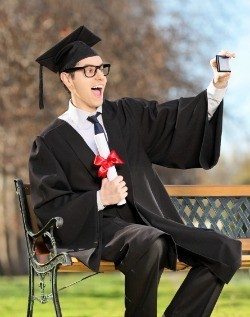 "Selfies," or self-photographs snapped with a mobile device, are a relatively recent phenomenon, but one that has caught on. According to Inquisitr, even the President of the United States has snapped a few. Selfie-etiquette, on the other hand, is a little less clear, and some events -- such as the case of a teen taking a selfie in front of a train -- have prompted a public discussion on whennotto take them. One major university has even explicitly asked students to refrain from taking selfies during what is likely one of the most pivotal moments in their lives: Graduation.

Bryant University in Rhode Island has asked its graduating seniors not to take selfies while accepting their diplomas next month, reported The New York Times. Last year, some graduates used their phones to snap photos of their big moment. The commencement committee worried that the same trend could slow down the ceremony this year.

"We have about 850 graduates, and we have a professional photographer snapping their picture when they shake my hand and get their diploma," Ronald Machtley, the president of Bryant, told The New York Times. "I don't think their mom and dad and grandma want to get a picture of them holding up their cellphone."

Machtley is quick to emphasize that the ban is not intended to be a war on social media. On the contrary, students are encouraged to post messages to their families on an online tagboard using a special Bryant graduation hashtag before the ceremony, and the selfie ban was initially announced via the social media app Snapchat. Machtley himself is a social media connoisseur, reported USA Today.

"I tweet a lot, I have 2,200 followers on campus and I think the fear was…because I take a lot of selfies throughout the school year that it would become an epidemic," Machtley said. "Our staff was trying to protect me and the students from making this ceremony any longer."

Machtley assured students there will still be plenty of time for selfies outside of the ceremony. During the lead-up to the commencement, the president and his wife will welcome members of the graduating class into their home, noted The New York Times, where they can snap photos to their hearts' delight.

"I'll stand there with anyone who wants one," Machtley said.

Selfies have drawn a lot of media attention as of late, reported Inquisitr, and have become so mainstream that even politicians and other powerful people have gotten in the act. President Barack Obama, Vice President Joseph Biden and even Pope Francis have each taken high-profile shots, and comedian Ellen Degeneres posed for a selfie with several celebrities during the Oscars that quickly went viral.

"Go Forth and Conquer, but Postpone the Selfie," nytimes.com, April 18, 2014, Tamar Lewin,http://www.nytimes.com/2014/04/19/education/go-forth-and-conquer-but-postpone-the-selfie.html