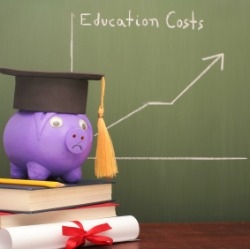 If college students feel like they are paying more tuition but getting less out of their education, a new report attests to their feelings, and also explains how budget cuts to education along with increased student costs will negatively impact the nation's economy over time.

A new study from the Center on Budget and Policy Priorities finds that states' higher education spending dropped by an average of 28 percent per student between 2008 and 2013, though some states cut significantly more. The cuts were made in part to help offset revenues lost during the economic downturn, but the study's authors say that "misguided policy choices," such as an overreliance on spending cuts in lieu of revenue increases, also played a role. The loss in state funding forced public colleges and universities to increase tuition by an average of 27 percent nationally over the same period, notes the report, with seven states increasing tuition by 50 percent or more.

Researchers suggest that this combination of events -- both the loss of state support for higher education and the steep increase in student costs -- could have potentially detrimental long-term consequences. First, college could become prohibitively expensive for many students, reducing educational attainment at a time when more employers than ever demand college degrees. According to the report, the U.S. Department of Education indicates that college enrollments grew by 46 percent between 1996 and 2010, but have actually declined the last two years.

"There are more students going to college but fewer resources spread across those students," Phil Oliff, CBPP policy analyst and co-author of the report, told The Huffington Post. "It's very clear that rising costs dissuade students from attending college, particularly students from low-income families." The report suggests that this growing skills gap could strain state economies.

A second potential consequence of the state-student education cost shift is a decline in educational quality for those who do manage to go to school. According to the report, many institutions have already slashed student programs and faculty, which Oliff said could make it harder to maintain academic quality and improve graduation rates.

The report said that if legislators hope to improve educational attainment and quality within their states, they must renew their investment in higher education through increased tax revenues, or, at the very least, "avoid shortsighted tax cuts."

"Unless technology allows colleges (to become) massively more efficient more quickly than anybody currently expects…we're going to be living with the effects of these cuts for a long time," editor Joe Weissmann wrote in an analysis of the paper he penned for The Atlantic. "We'll see them in the form of higher student loan bills and students who can't graduate on time, because the classes they needed filled up too quickly. We'll see it in the form of the jobs lost on campuses."