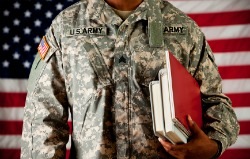 For U.S. veterans, the transition to civilian life after years of military service can be a challenge, especially with a less-than-stellar job market waiting for them. But there is one increasingly attractive option: go to business school.

According to Bloomberg Businessweek, a number of leading business schools -- including Wharton, Harvard and the University of California, Berkeley -- are ramping up their service member recruiting efforts. B-schools have started to recruit more veterans because they have strong leadership skills and boost diversity.

Veterans "are people who have been in very high-stress situations," said Deirdre Leopold, admissions director for Harvard Business School, to Bloomberg Businessweek. "They bring a different perspective."

Another reason B-schools want veterans is because they can bring in a great deal of federal aid at a time when civilian students make do with less. As Bloomberg Businessweek pointed out, the GI Bill may pay up to $17,500 a year in tuition plus a living stipend. The Yellow Ribbon program, meanwhile, may match up to $10,000 in school-provided assistance each year. All in all, vets can receive as much as $55,000 in tuition assistance over two years, plus another $20,000 from schools.

According to The Eagle, business schools also provide a number of benefits to veterans struggling in a tough job market. Rob Davis, director of the Veterans Support Office at Texas A&M, noted that veterans between 18 and 24 years of age face staggering unemployment rates -- more than 30 percent.

"Going to school is a pretty good option. Period. But especially if you don't have a job," said Davis.

But that's not all: another reason business school would be a good option for veterans is the emphasis on leadership.

"These MBAs are doing the same great work they did in the military and transferring those principles, values and leadership experiences into a business school environment," Veteran Scott Quigley told The Financial Times.

But while b-school offers service members its share of benefits, the application process can be challenging, especially among those still serving. For instance, U.S. Army Ranger Aaron Perrine worked on his applications and admissions essays between long combat missions in Afghanistan.

"Depending on the evening, we might come back from a mission around sunrise," Perrine told The Financial Times. "We would take off our gear, debrief, go eat breakfast, and then I'd work on my Wharton essays for an hour or so before going to sleep."

Perrine, however, noted the hard work pays off. New veterans cannot expect investment banks and consulting firms to hire them without formal education, even with the extensive leadership training honed in the military. But the combination of military experience and an MBA, on the other hand, is "very compelling for employers," said Perrine.

Employers may agree. According to Bloomberg Businessweek, companies like Microsoft, Google and PepsiCo have vowed to hire more veterans. Thanks to the Vow to Hire Heroes Act of 2011, which provides tax credits to companies who hire veterans, other organizations may soon follow suit.