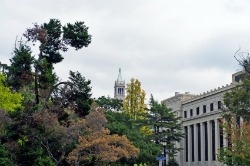 A California lawmaker has proposed a bill that would limit the number of out-of-state students at each of the 10 University of California campuses.

SCA 22, a proposal suggested by State Sen. Michael Rubio, would require that 90 percent of the students at every UC campus be from in-state -- meaning that only 10 percent could be from out-of-state or international, reported the Los Angeles Times.

More and more out-of-state students seem to be enrolling at UC. As The New York Times pointed out, some 11.5 percent of non-Californians were enrolled in the overall UC freshman class in 2009. That figure jumped to more than 23 percent in 2012.

"SCA 22 ensures that California students get a fair shot of attending our University of California system -- and not be turned away simply because a wealthy student from the East Coast or abroad shows up with a checkbook in hand," Rubio said in a statement quoted by the Los Angeles Times.

The measure has been backed by the union that represents UC employees with Kathryn Lybarger, president of that union, speaking positively about SCA 22 last week.

"This means that when my kids aspire to go to a UC campus... they stand a chance at it," she said during a press conference, as quoted by the Daily Bruin.

The proposal, however, does have some wondering about the potential effect on some of UC's more prestigious campuses such as the University of California, Berkeley and the University of California, Los Angeles. These two schools have higher out-of-state enrollment numbers than the other UC campuses, notes the Daily Bruin. Out-of-state tuition, of course, costs more and brings in more revenue.

"These campuses are the ones that need to have flexibility in admitting nonresident students," said Steve Montiel, a UC spokesperson, in the Daily Bruin. "There's way more demand from out of state and this is how (the campuses) maintain quality and competitiveness."

"If you restrict the university's ability to raise funds and don't provide alternative sources, where will the money come from?" he said in the Daily Bruin.

Extra revenue is important at a time when the UC system has undergone significant cuts in its state funding. According to The New York Times, Peter King, another UC spokesperson, indicated that the UC system is now operating at a 1997 funding level while serving an additional 70,000 students.

He also said that the UC system would not back the measure. The proposal could potentially be placed on the November ballot, but it must first be approved by at least a two-thirds vote in the state legislature or have signatures from at least 8 percent of voters from the last gubernatorial election, noted the Daily Bruin. If on the November ballot, a majority of California voters must approve it in order to pass.