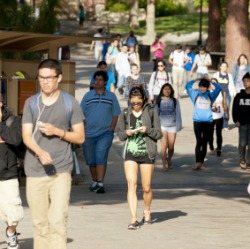 California college students struggling to get access to impacted courses may soon have an alternative to waitlists. One state lawmaker is scheduled to introduce a bill today that would require California colleges and universities to give credit for classes that students take online when they are unable to enroll in a campus class.

According to The Wall Street Journal, California pro tem Senate president Darrell Steinberg plans to propose the bill, which would make the state the first in the nation to grant system-wide credit to college students who complete an online course. Steinberg hopes that the bill will help students graduate on time, an issue that the state has been struggling with as state funding continues to get cut.

“…No college student in California will be denied the right to move through their education because they couldn’t get a seat in the course they needed,” said Steinberg in The New York Times. “That’s the motivation for this.”

As Steinberg pointed out, thousands of students have been denied access to necessary classes due to budget cuts. These cuts to funding have left public higher education systems with limited resources. As a result, many students end up spending extended time in college, waiting to get into classes they need in order to graduate. The problem is particularly acute in the state of California where, on average, 7,000 enrolled students are placed on waiting lists at each of the state’s 112 community colleges. Furthermore, at the 23-campus state university system, just 16 percent graduate on time, partly due to difficulties enrolling in classes they need.

“It’s almost unthinkable that so many students seeking to attend the public colleges and universities are shut out,” commented Molly Corbett Broad, the president of the American Council on Education, in The New York Times.

Under the proposed bill, potential alternatives to overenrolled campus classes could include free MOOCs from providers such as Coursera, edX and Udacity, as well as online classes from companies such as Straighterline or Pearson. Though the bill would allow students to take and receive credit for such third party courses, students can only do so if the course is full at their home institution and the school does not offer an online version.

According to The New York Times, a panel of faculty from each California college system would select 50 introductory classes that are most impacted and determine which online versions would be the equivalent alternatives for credit. The panel would take into consideration factors such as proctored exams, use of open-source texts and whether the online class has been recommended by the American Council on Education (ACE). So far, ACE has recommended 5 Coursera MOOCs for college credit. San Jose State University also recently partnered with Udacity to launch a program that would grant college credit for 3 introductory courses offered through Udacity.

The move is significant within higher education, an industry that is often reluctant to change.

“This would be a big change, acknowledging that colleges aren’t the only ones who can offer college courses,” said Burck Smith, founder of Straightline. “It means rethinking what a college is.”

Though many higher education leaders are supportive and optimistic of the proposal, some expressed concerns.

“This whole online thing is not well-vetted yet,” argued Lillian Taiz, president of the California Faculty Association, in The New York Times. Taiz went on to say that the legislation fails to address the root of the problem—severe budget cuts.

In a similar vein, according to Inside Higher Ed, Coursera co-founder Andrew Ng who supports the legislation, pointed out that the bill should not be used to hire fewer teachers.

In The New York Times, Timothy P. White, chancellor of the CSU system, best described the problems that may soon lie ahead, if the bill is passed: “We need innovation, but we also need quality, and the devil’s in the details.”