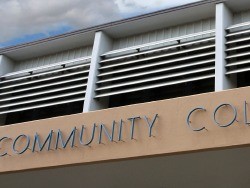 California's higher education system is reviewing a proposal to allow community colleges to offer four-year degrees, the Los Angeles Times reported. If the appropriate legislation passes, California would be the 22nd state to implement bachelor's degree programs in junior colleges.

There are several arguments both for and against the proposal. Those supporting it say that expanding bachelor's degree offerings to community colleges would help fill current deficiencies in workforce training and would also help students who live in rural areas and who may not have access to a four-year college. Education experts have stated that the initiative could also help meet program needs specific to local communities and listed automotive, biotechnology, and nursing programs as examples. Davis Jenkins, senior research associate at the Community College Research Center at Columbia University's Teachers College, supported the measure, "[p]rovided [community colleges] are offering bachelor's degrees that other public institutions aren't offering, particularly in applied technical areas."

Opponents of the initiative, however, argue that not only does it stray from the mission of the community college system, but the state doesn't have enough budget for it. As noted by The Daily Californian, California's Master Plan for Higher Education states that CSUs, community colleges, and UCs should be able to carry out their respective roles without competing with each other. According to UC spokeswoman Shelly Meron, "(The) UC has historically viewed the state's Master Plan as an effecient way of managing and allocating limited resources to equally important higher education functions." Rachel Fishman, an education policy analyst for the New America Foundation, echoed Meron's thoughts and added that the proposal would shift cost to students and duplicate efforts within the system. Rather than offering four-year degrees, Fishman stated, "California's community college system should look at innovative ways to open up the courses that are overenrolled, like entering into an online course-sharing consortium."

Beth Smith, President of California Community Colleges' Academic Senate, told CBS Los Angeles that for now, community colleges need to focus on improving the current system before delving into four-year programs: "The colleges first need to restore courses and class sections to meet our current mission before we consider adding to our role in higher education, and at the same time, we need to find solutions to the changing job market for many of our students who could previously find work with an associate degree but now need a bachelor's degree."

On the budget issue, the Los Angeles Times noted community colleges would not only need to increase the number of faculty with the necessary credentials to teach upper-division courses, but they would also need to upgrade laboratories and libraries. California Senator Marty Block, however, is not that worried about funding the initiative. He recounted that although he previously had to pull a 2011 proposal that would have allowed the San Mateo County and Grossmont- Cuyamaca community districts to offer certain bachelor's degree programs where workforce needs were high, "[t]imes have changed and we have a small surplus. As the education budget chair in the Senate, I think I can find pools of funding. The need has grown so great that private sector employees now have said they may be willing to offer money for a start-up."

A 16-person committee; which includes representatives from community colleges, UCs, and CSUs; was appointed to review the proposal. In December, the committee will present recommendations to Brice Harris, the California Community Colleges system chancellor. If approved by the committee and Harris, the proposal would then move on to the state legislature, the governor, and ultimately an accrediting commission authorized by the Department of Education.