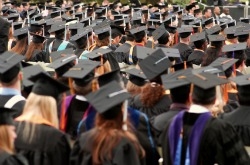 California community college leaders vowed to increase the number of certificates and degrees they award to students by one million within the next decade.

This pledge to boost graduation numbers was articulated in a report issued by the Commission on the Future, a group of 33 statewide chancellors, trustees and faculty leaders who convened to discuss how to meet California's higher education goals, The Chronicle of Higher Education reported.

According to the commission, setting this benchmark is part of an effort to contribute to President Barack Obama's American Graduation Initiative which was released last July. In the initiative, President Obama expressed his ambition to bolster the educational system by matriculating an additional five million community college graduates by 2020. To reach this goal, each college would need to increase annual completions from 1,200 to 3,500, producing about 35,000 more certificates and degrees awarded in California per year.

Despite this objective to aggressively increase the number of community college graduates, California college leaders face a daunting new budget deficit estimated at $25.4-billion, a disadvantage that officials fear may lead to cuts in state support.

"Nevertheless, while current budget constraints leading to reduced access, lost purchasing power, and student-service program cuts make the goal daunting, the commission believes that it is necessary to establish a goal that meets the economic needs of the state and nation," the report says.

This challenge, however, does not discourage commission co-chair Barbara Dunsheath, who also serves as a trustee at the North Orange County Community College District and teaches history at East Los Angeles College, The Red Bluff Daily News reported.

"What I particularly like about this report is that it recognizes the difficult financial times of the state, but identifies specific strategies that many of our colleges are using for increasing success even during austere times," she said. "Our goal is to see the best practices spread to all of our colleges and students."

According to The Times-Standard, these specific strategies include increasing leadership and accountability by recording student success data and making school more affordable by broadening access to financial aid.

The commission, a non-profit association that promotes student success through leadership development, advocacy and district services, is organized by the Community College League of California. The commission's report, A 2020 Vision for Student Success, was released on November 17.

"I am thrilled with the work of the commission, the bold goals it has established and the vision it has charted for the League in our work serving California's 112 community colleges," said Scott Lay, President and CEO of the Community College League of California. "The release of this report is simply a starting point."