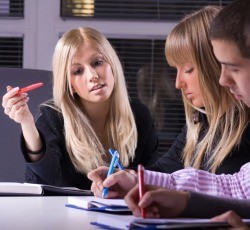 The California Department of Education announced the launch of a grant program intended to encourage schools to develop ways to connect academic learning with 21st century careers.

According to a California Department of Education press release, the grant program called California Career Pathways Trust will provide $250 million in grants to schools that partner with local businesses to create opportunities for students to link their academic learning with relevant work experience in the state's high-growth sectors.

"Our economy is growing and there are job opportunities, but there aren't enough educated and trained workers to fill them," explained Senate President pro Tempore Darrell Steinberg during a news conference where he announced the grant program with State Superintendent of Public Instruction Tom Torlakson, as quoted by the Oakland Tribune. "We're seeking California industries to partner with community colleges and put forward multimillion dollar applications that will establish pathways to careers."

According to the Los Angeles Times, a 2012 evaluation of nine LA school districts revealed that educators and students wanted opportunities to partner with businesses for internships or other work-based learning experiences, but that there were very limited options.

In addition to helping students earn gainful employment and businesses fill a need for more skilled workers, the program is also intended to make education more relevant and keep students engaged so that they do not drop out of school. Both Torlakson and Steinberg noted that these types of career pathways programs have helped to reduce dropout rates.

"Once students get involved in a career pathway, they see the relevancy of their education," explained Torlakson in the Los Angeles Times.

The press release reported that this would be a one-time grant. School districts, county education offices, charter schools and community college districts can apply for a grant by creating a career pathways program that would connect businesses, K-12 schools and community colleges in order to better prepare students for the work world. EdSource noted that applicants must show that their program is self-sustaining and include a five-year budget plan detailing how they intend to finance the program once the grant money has been spent. According to the Oakland Tribune, applicants are encouraged to partner with a variety of industries, particularly those expecting high job growth in the state -- health care, manufacturing, biotechnology, aerospace, agriculture technology, energy and computer science. The state will award 10 grants up to $15 million each, 15 grants up to $6 million each and 15 grants up to $600,000 each. EdSource noted that recipients will be awarded the money over the course of three years -- 50 percent the first year, 35 percent the next and 15 percent the third year.

According to the Los Angeles Times, California Career Pathways is the nation's largest effort to build broader connections between education and businesses. The Oakland Tribune also noted that California's program is $150 million more than a similar federal program that was recently announced.