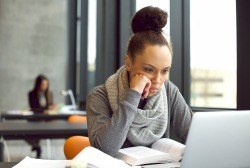 As researchers and politicians alike analyze the impact of rising student debt, steep tuition is often central to these discussions. At least one expert told the Los Angeles Times there is another, often overlooked factor at play: time to completion. A new study that found it takes the average California community college student more than four years to complete a single associate degree -- costing the state and students billions -- suggests this expert may be onto something.

A recent study from the nonprofit Campaign for College Opportunity analyzed how long it took nearly 64,000 2013 California community college graduates to earn a single associate degree. The answer: 4.1 years for the median student, nearly double the intended two years that was once the norm. Michele Siqueiros, the group's executive director, suggested that the datapoint is an important one in an ongoing national discussion about college costs and debt.

"We're all talking about a college affordability crisis," Siqueiros told the Los Angeles Times. "And time is part of that crisis."

This trend can prove costly, not just for the state, but for the students themselves. The Los Angeles Times estimated that a student who requires six years to earn an associate degree from a regional community college will incur an extra $120,000 in expenses and lost wages over his or her career when compared to those who completed their educations in two years.

There are a number of factors that may contribute to the length of time it takes to earn a degree, including work and family obligations and the increasing number of students who must complete remedial courses. Siqueros told Capital Public Radio that state funding is another issue, because cuts have forced many colleges to cut courses "severely." That means students may have trouble getting into the classes they need, extending their time to completion. It also means that students who need to be enrolled in a minimum number of courses to maintain financial aid must enroll in unnecessary courses to maintain eligibility. The study recommends that colleges make it easier to complete remedial courses and to take steps to ensure low-income students have access to financial aid, the Los Angeles Times reported. They also called for California to increase funding to schools.

"The report's findings do not plough a lot of new ground for us, and its recommendations model what the community colleges have already implemented," Dorr said. "The California Community Colleges system has for many years focused on improving time to completion and keeping costs low for students."

The California Community Colleges chancellor's office also suggested the study may be incomplete because researchers only tracked the associate degrees, not certificates.

"If you have someone [who has] earned an associate degree and got a certificate along the way, those should be counted as a success," California Community Colleges spokesman Paul Feist told Capital Public Radio.