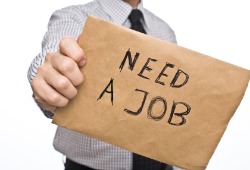 The California unemployment rate rose to a staggering 12.5 percent as the state's budget crisis continues to weigh down on the job market.

The jobless rate climbed to 12.5 percent in December, up from 12.4 percent the previous month, The Los Angeles Times noted. California's unemployment rate is among the highest in the country, trumping the national unemployment rate by nearly 2 percent. California employers added just 4,900 jobs in December, the Employment Development Department reported, after adding 30,500 the month prior. The biggest losses were seen in the government sector, which shed 15,400 jobs.

"We're going to see loss in government jobs for the foreseeable future," said David M. Smith, associate professor of economics at the Graziadio School of Business at Pepperdine University. "Frankly, they need to be on the decline for us to get our budget situation under control."

Overall, California has added a total of 87,500 jobs in 2010. The openings came mostly from professional and business services; education and health; and leisure and hospitality. Although the additions are not enough to lower the unemployment rate, it is a big improvement compared to 2009 when the state lost 836,000 positions.

Marvin V. Davis is one of the thousands of unemployed government workers struggling to find work in California. The Sacramento resident was laid off from his position as a financial analyst in July. Even though he holds an MBA and is a certified professional account, the only jobs he has been able to find pay minimum wage. He has interviewed for a few government jobs, but is concerned that the agencies are hesitant to hire because of the uncertainty of the budget.

"What on earth is going to happen to state and local governments is a big question mark," Nancy Sidhu, chief economist at the Kyser Center for Economic Research at the Los Angeles County Economic Development Corporation, told the International Business Times. "But I can't think of any good results."

According to a report by the Business Forecasting Center at the University of the Pacific, the sluggish recovery will keep California's unemployment rate above 10 percent for three more years, the Central Valley Business Times noted. In particular, Northern California is predicted to struggle the most due to the weak homebuilding industry.

"The San Francisco economy was the biggest disappointment in 2010," the report says. "Finance and professional service jobs are still sliding in San Francisco while they have begun to recover in most of the nation's other financial and technology centers."