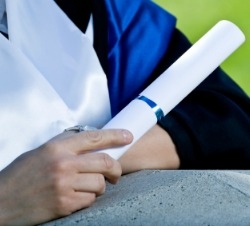 At a time when college tuition is rising and students are graduating more indebted than ever before, California may be joining the ranks of other states, including Texas and Florida, that are recommending putting programs in place to reduce the cost of a college education. According to the Sacramento Bee, attending college at many California campuses now tops $30,000 per year. One Republican state assemblyman -- Dan Logue of Marysville -- has proposed legislation that could make it possible to earn a bachelor's degree within the state for just a third of that price, including books. But while the $10,000 bachelor's degree is an idea that is taking root in other states, some California officials question its feasibility, reports The Bee.

According to the Chico Enterprise-Record, California Assembly Bill 51 proposes a pilot program that would allow students to earn bachelor's degrees within 18 months and at a cost of no more than $10,000, similar to programs being drafted by other states.

"I hope my bill will be the beginning of a revolution to the very pressing issue of the costs of college that students face these days," Logue told The Sacramento Bee. "We cannot expect today's students to have a higher standard of living than their parents if they continue to leave college saddled with so much debt."

The Chronicle of Higher Education notes that the legislation would result in California high schools, community colleges and universities absorbing much of the costs not covered by the capped tuition. Students would begin to earn credits in high school through Advanced Placement Courses and would enroll full time at a community college after graduation. State universities would then be required to accept up to 60 credits of transfer coursework.

According to the Chico Enterprise-Record, only students majoring in STEM subjects -- or science, technology, engineering and mathematics -- would be eligible for the pilot program. Logue told the newspaper he hopes Bill 51 would lead more American students into jobs in the high-tech STEM fields that are increasingly filled by recruits from other countries.

Some legislators and college administrators remain skeptical about the efficacy of Bill 51. The Chronicle of Higher Education reports that the bill would require the state -- in addition to the high schools, community colleges and universities -- to absorb much of the cost of educating the program's graduates. Furthermore, Chico State University President Paul Zingg told the Enterprise-Record that the program, while an "interesting notion," is based on "so many faulty understandings about how people learn." According to Zingg, the proposed degree programs would be based on memorization as opposed to understanding due to their truncated completion time.

"We're helping them [young people] grow up as well as become more skilled. The notion that we will accomplish all of that in 18 months is very ill-informed," Zingg said.

Logue told the Enterprise-Record that he plans to meet with Zingg and other college officials to discuss the bill and its potential obstacles.

"I think our state needs to evaluate what a four-year education is all about," said Logue.

The Sacramento Bee reports it is unclear whether Logue's bill could make headway in California's Democratic-controlled Legislature, especially as Assembly Speaker John A. Pérez and Democratic Gov. Jerry Brown both say they have their own plans for increasing college affordability in California. California State University officials have not yet taken a stance on Logue's bill.