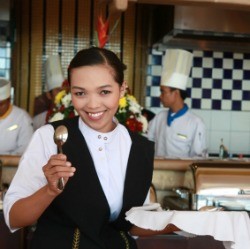 A bill to increase state minimum wage may soon make California the state with the highest minimum wage in the country.

As reported by the Los Angeles Times, bill AB 10, which passed both the state Senate and Assembly last Thursday night, would boost California's minimum wage 25 percent by 2016. The increase would occur in two separate $1 increments, raising the current $8 an hour minimum wage to $9 in July 2014 and again to $10 in January 2016. This would be the state's first minimum wage increase in five years. ABC News noted, however, that the increase is not adjusted to inflation.

The measure encountered little resistance from California's Senate and Assembly, passing 26 to 11 and 51 to 25, respectively. Democrats strongly supported the bill, arguing that it would help families still struggling from the recent recession as well as stimulate the economy by encouraging more spending. Gov. Brown praised the bill and said he would sign it.

"The minimum wage has not kept pace with the rising costs," said Gov. Brown, as quoted by The Wall Street Journal. "This legislation is overdue and will help families that are struggling in this harsh economy." Gov. Brown has until October 13 to sign the bill.

According to The Wall Street Journal, no other state has a minimum wage at $10 an hour; though 10 states do index their minimum wage to the consumer-price index so their minimum wage could be close to $10 by 2016. Washington currently has the highest pay -- $9.19 an hour. Some cities, such as San Francisco ($10.50), have even higher wages, noted ABC News.

Needless to say, many workers, particularly fast food workers who struggle to make ends meet, say the boost in pay is helpful. Shonda Roberts of Oakland, who has been a fast food worker for 15 years, told the Los Angeles Times that it has been difficult to feed both herself and her teenage son on her current pay.

According to The Daily Californian, Sylvia Allegretto, co-chair of the UC Berkeley Center on Wage and Employment Dynamics, said the wage increase would help reduce employee turnover at restaurants. However, Allegretto also called the increase "fairly modest" and pointed out that California minimum wage workers currently make less than they would have been three decades ago after inflation is factored in.

Opponents of the bill argue that the increase would be more harmful than helpful. According to the Los Angeles Times, the California Chamber of Commerce described the bill as a "job killer" and warned that raising the minimum wage would also raise the unemployment rate and jeopardize the state's economic recovery. Jot Condie, president of the California Restaurant Association agreed, saying that the increase would burden restaurants and cause employers to cut back on workers' hours as well as reduce hiring.

In ABC News, Senator Ted Gaines (R-Rocklin), compared the minimum wage increase to raising tobacco prices: "If you make something more expensive, people will buy less of it."

The Los Angeles Times noted that raising the state's minimum wage would give an estimated 2.4 million California workers more money in their pockets. The Wall Street Journal reported that leaders in Illinois, Massachusetts and Maryland are also fighting for state minimum wage increases.