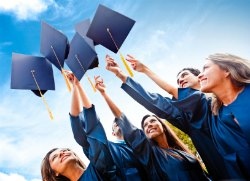 California colleges have been receiving the short end of the stick when it comes to state funding, but a new report shows that the schools could come up short in another area: the number of college-educated graduates they produce.

According to the Los Angeles Times, the report released by California Competes, a cohort of civic and independent business leaders, estimated that the state needs to have more than 5 million new students who have a technical education or bachelor's degree by 2025 for the state to meet its future employment needs.

Things aren't looking all that positive -- right now, the numbers show that California is in line to produce just 3 million such students by that date, leaving a shortage of some 2 million. According to the report, this is of great concern since the California Workforce Investment Board pointed out that most of the next decade's top skilled-job openings will require postsecondary training. The shortage of highly educated employees could potentially cause businesses to go elsewhere, noted Dennis Cima, senior vice president of the Silicon Valley Leadership Group, in the Mercury News.

"The Silicon Valley is a knowledge-based economy," he explained. "If we don't have college-educated people here in the Silicon Valley, then companies will go where the people are."

To reach the necessary number, the Los Angeles Times noted that California must produce 4 percent more such graduates each year.

"We must ensure that higher education equips Californians with the skills they need to succeed," Bob Foster, Long Beach mayor and council chair for California Competes, said to the Contra Costa Times. "If we can educate our young people, we will have a robust economy and it will create the jobs people need and services people count on."

The report also makes several recommendations. These include improving community college management so that students can get the classes they need to graduate as well as modifying priorities to make sure funding goes toward increasing the number of degrees and certificates granted at community colleges. This is a concern because California is 49th in the nation in terms of students completing a two-year college education each year, reported the Contra Costa Times.

The Mercury News also reported that many high school students aren't prepared to enter college and that the remedial coursework they need is often unavailable due to cuts in funding. Furthermore, the system does not have unified goals to better operate its 112 community colleges, 23 state campuses and 10 universities.

"There is a lack of clear direction from the state of California as to goals and a lack of flexibility to meet the needs of the current economy," said Eloy Ortiz Oakley, president of Long Beach City College, to the Los Angeles Times. "The needs continue to mount, and we have not adapted to those changing needs."