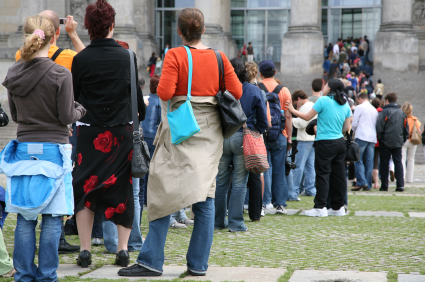 College and university students throughout California are clamoring to enroll in courses that have been severely cut back because of state budgetary constraints.

The situation has become so dire, reports the Los Angeles Times, that the University of California Santa Barbara packed 500 students into a Greek mythology course and placed another 300 on a waiting list. The course's professor, Apostolos Athanassakis, said that it's "the most desperate" start to a winter quarter that he can remember in over four decades of teaching at the university.

"There is confusion and fear," he told the LA Times. "The students don't know what to do. They're afraid they may not be able to graduate."

Because of state budget cuts, course offerings have been reduced by as much as 11 percent on some UC campuses, making graduating on time an issue for many students. The situation is being exacerbated further by tuition hikes; many students are clamoring to finish school as quickly as possible while it's still relatively affordable.

"If the rest of my years here look like this, there's no way I can graduate in four years," said Marcus Rochelle, a sophomore at UCSB who was only able to sign up for three classes this term and was interviewed by the LA Times. "I'm really hoping not to go into a fifth year because that will be an extra 10 grand I don't have."

The crunch is also being felt at California community colleges. KABC-TV reports that at San Bernardino Valley College, some faculty members have resorted to creating a lottery system to determine who will receive the last few slots in classes that have waiting lists of as many as 20 people.

"We're in a little bit of a perfect storm actually when it comes to the economic downturn, and the cutbacks at Cal States and UCs," explained Craig Petinak of SBVC, who was interviewed by KABC. "Students are flooding our front door with the opportunity to affect their educational future."

CBS 13 in Sacramento reports that at San Joaquin Delta College, 750 classes have been canceled, causing many students to be placed on waiting lists. Catherine Mooney, the school's admission director, noted that this is the first time she can remember that the community college was forced to close registration early.

"Our waiting lists are pretty much full," she told CBS 13.