California Teachers Brace For Another Round Of Pink Slips And Layoffs 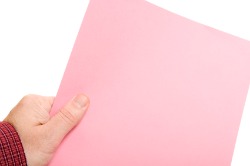 California public school districts are bracing for the worst as the State faces a growing budget deficit.

The districts' latest woes stem from the Legislature's decision, to date, not to extend a $12.6 billion package of temporary taxes, a move that would all but guarantee major cuts to K-12 education. State Superintendent of Public Instruction Tom Torlakson told The Fresno Bee that without a tax extension, the annual K-12 education budget may be cut by as much as $4.5 billion, or 10 percent of the state's total education spending.

Meanwhile, California Watch reports that districts across the state have been forced to issue about 22,000 pink slips within the last week. If districts are forced to actually follow through with the firings, it would only add to California's 12.4 percent unemployment rate, the second highest in the nation.

"I don't want to take away what we have here," Ojai-based teacher Trustee Kathi Smith told the Ventura County Star, "I think we are dismantling something that is very precious." Ojai's district has already handed out dozens of layoff notices. "It's painful," said Simi Valley Trustee and California Teachers Association organizer Arleigh Kidd, who noted that in light of an uncertain state budget, board members must do what they can to keep districts solvent and kids in the classroom. Simi Valley schools have approved layoff notices for 51 full-time-equivalent positions, including 20 elementary school teachers and five school counselors.

California Watch likened the number of lost jobs in Los Angeles alone to the closure of Toyota's NUMMI plant in Fremont, CA two years ago, but with one discernible difference: unlike a factory, where assembly lines are simply shut down, students must still go to school. These potential staff cuts, which put those with the least seniority at the highest risk, would mean larger class sizes, shorter school years and a major reduction in individual attention for students.

Mass layoffs and tighter budgets are not new to California schools. "This will be the fourth bad year in a row," California School Boards Association Assistant Executive Director Rick Pratt told California Watch.

The Fresno Bee notes that some school districts were spared the tough task of preparing for teacher layoff--including Central, Clovis, Sanger and Visalia--but only because these districts already made similarly painful cuts in the previous two years while larger school districts, like Fresno Unified, were able to delay the move. In the end, virtually every region of the state will likely feel the pain of California's budget shortfall.