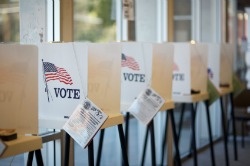 According to The Chronicle of Higher Education, Proposition 30 calls for an increase in the state sales tax by a quarter of a cent over four years and an increase in income tax of up to 3 percent for those making more than $250,000 annually for seven years. The proposition's passage curtails a number of "trigger cuts" outlined in the 2013 state budget that could have led to a $1 billion reduction in funding for higher education in California. Proposition 30 is expected to help make up for some of the $16.7 billion state budget shortfall in 2013. According to the San Jose Mercury News, it is also the first general tax that California voters have passed in 20 years, and it passed with a margin of 53.9 percent to 46.1 percent (with all precincts reporting).

California Governor Jerry Brown waited until close to midnight to declare victory: "We had a lot of obstacles," he said as quoted by the San Jose Mercury News. "We overcame them."

Up to Election Day, early polls showed support was below 50 percent and, in the fall, backers of the initiative seemed to be decreasing, The Huffington Post reported. To garner support, Governor Brown, who created the ballot initiative, reached out to colleges and younger voters. As it turned out, their votes were important -- 18-to-29-year-olds represented 28 percent of the electorate in the state, matching or surpassing the turnout for every other age group except those aged 45 to 64.

"It sold itself," said Brown during a victory party, as quoted by the San Jose Mercury News. "The core reason it brought people together was a belief in schools and universities and the capacity of government to make wise investments that benefit all of us."

The proposition, however, did have critics. Palo Alto physicist Charles Munger Jr., son of a billionaire businessman, worked hard to rally support against the measure. He argued that the state had money that it was throwing away on projects such as a $69 billion high-speed rail line.

With the passage of Proposition 30, state funding for higher education should stay close to 2012 levels, The Chronicle of Higher Education noted. Since 2008, California's public higher education system has undergone cuts totaling more than $2.5 billion.