Californians Worried About Funding For UC, CSU And Community Colleges 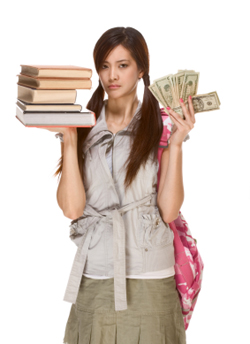 Californians are worried about the state of higher education as tuition fees continue to rise and said they would prefer more spending on public colleges and universities, even if it resulted in increases to their own taxes or less money for other state programs.

These findings were from a survey conducted by the Public Policy Institute of California (PPIC) and were released a week after the California State University approved, and the University of California proposed raising fees. According to a PPIC press release, 74 percent of California residents think the state does not provide colleges and universities with sufficient funding. Most (68 percent) believe spending for public higher education should be a high or very high priority and 62 percent reported being very concerned that state budget cuts will result in significant spending cuts within higher education.

Furthermore, Californians are worried that they will not be able to afford college. The percentage of parents with children 18 or younger who are concerned about the cost of college has steadily increased since October 2007. Today, some 57 percent of parents with college-bound kids are worried about paying for college. The concern was even higher among Latino parents--72 percent reported being very worried, which is up 19 points from 2007.

Despite a lack of state funding, most Californians said each branch of the system--UC, CSU and CCC--is doing a good job. However, 66 percent think educational quality will suffer if the government makes cuts. As the press release pointed out, Californians value a college education more than most adults nationwide--86 percent versus 75 percent. "As the economy has grown worse, more people think that a higher education is the key to finding a way out of this economic mess," said PPIC President Mark Baldassare to SFGate. "But at the same time they're increasingly anxious about the state of public colleges and universities."

In order to maintain current funding and remain accessible, residents favored alternatives such as paying higher taxes, admitting more out-of-state students who pay higher tuition (as long as doing so does not mean that fewer California students are admitted) and using funds more wisely or increasing funds. A large majority also called for more government spending for work-study programs, scholarships and grants and even a sliding scale tuition that is based on income.

"For the public, higher education still holds out that promise for a better future for themselves, their neighbors and the next generation of Californians," said Baldassare to the Los Angeles Times. Later, he added, "If the systems are going to be asking for fee increases, the public wants to be assured that the people who can't afford it are going to be able to find their way into college classrooms."