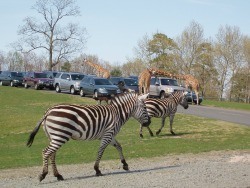 Imagine telling your boss that you were late for work because your cat got stuck in the toilet, or because a loose zebra snarled traffic on the freeway. What about having to explain that you woke up on a stranger's lawn or that you were too spooked by a nightmare to make it to the office on time? According to a new survey, these are just a few of the most memorable excuses employees have given for tardiness -- a habit many employers do not tolerate.

A recent survey from the career firm CareerBuilder compiled some of the most unusual excuses employees have given bosses for lateness, reports The Kansas City Star. Among them: Accidentally putting glue instead of contact lens solution in an eye, mistaking Halloween for a work holiday and forgetting that the company changed its location. One employee overslept when rain falling through a hole in the roof shorted out the alarm clock, and another had simply fallen asleep in the car after getting to work. While most excuses are unverifiable, some -- including the zebra at large -- were confirmed.

Most employee excuses are not so novel. The Star reports that the most common, but perhaps least creative excuses given are traffic snarls (39 percent), lack of sleep (19 percent) and problems with public transportation (8 percent). Bad weather and having to drop the kids off at daycare or school also cause a fair share of lateness.

According to United Press International, employee tardiness -- whatever its cause -- is fairly common: 23 percent of workers indicated they were late for work once a month, and 15 percent once a week. As for employers, they largely have little patience for lateness. Overall, 48 percent of bosses said they do not tolerate any tardiness, and 35 percent said they fired workers for the habit. On the other hand, 34 percent of employers said lateness is okay so long as it does not become a habit while 18 percent said that getting work done on time was more important than adhering to a company time clock.

"Most employers understand that occasionally things pop up and cause employees to be behind schedule. The trouble comes when tardiness becomes a habit," Rosemary Haefner, vice president of Human Resources at CareerBuilder, said in a press release. "Employees who are often late should consider regularly checking the weather forecast for their commute, setting up alerts from any public transportation they use, or getting more done the night before so they're not rushed in the morning."

The survey was conducted by Harris Interactive between Nov. 6 and Dec. 2, 2013, notes the press release. Respondents included 3,008 full-time employees of at least 18 years of age and 2,201 hiring managers and human resource professionals. The respondents came from a wide range of industries and company sizes.