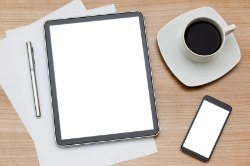 Saturday is National Coffee Day, and many food retailers will be offering customers a free celebratory cup. According to a new survey, however, most U.S. workers do not need an excuse to drink coffee, especially those in certain occupations.

The Examiner reports that a joint survey funded by job-search site CareerBuilder and pastry-chain restaurant Dunkin' Donuts identifies the top 10 careers in which workers drink the most coffee. Leading the way: restaurant workers were in the top with scientists coming in as second. Sales representatives, marketing professionals and nurses round out the top five.

In many cases, the benefits of caffeine to a particular employment group can be quite clear. An upbeat attitude is often important for restaurant workers, sales representatives and marketing professionals. Scientists and nurses, on the other hand, may find coffee helpful in maintaining focus and attention to detail. Additionally, they often work longer hours. In many cases, coffee also serves as a social medium.

"There's a reason why coffee is a staple in the workplace," said CareerBuilder Vice President of Marketing and Communications Cynthia McIntyre in a Dunkin' Donuts press release. "Workers report that coffee fuels higher energy and productivity, and serves as a means to socialize with colleagues."

That last point has even been research-tested. According to NPR, a study published last year revealed that the most common benefit of regular coffee drinking as reported by the most respondents -- 20 percent -- was that it gave them a chance to network and socialize with their colleagues.

However, there can be other benefits. A NPR noted, another study published last year found that women who drink coffee are less likely to be depressed; similar results have been reported for men. A prior version of that study -- published in 1996 -- found an "inverse association" between coffee consumption and the risk of suicide. There are also studies that suggest coffee drinkers may live longer than their non-coffee-drinking peers.

"...As these survey results show, coffee continues to become more and more essential in the workplace in particular, helping workers across all professions stay productive throughout the workday," said John Costello, Chief Global Marketing and Innovation Officer at Dunkin' Brands.

The Dunkin' Donuts press release also identifies other coffee trends inherent in the results. Women, for instance, are more likely to say they need coffee to function: 47 percent say they are less productive without coffee compared with 40 percent of men. The data also suggests there are geographical variations in coffee consumption. Northeasterners rank highest in coffee consumption with 64 percent drinking at least one cup a day followed by workers in the South where 54 percents of workers had a minimum one cup a day.

The survey was conducted online by Harris Interactive and included 4,152 employed, full-time U.S. workers age 18 or older, the Examiner reported.

"New survey spills the beans on jobs that drink the most coffee," examiner.com, September 24, 2012, Brian Gillie