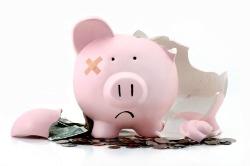 If you find yourself living paycheck to paycheck or saving little to no money each month, a new survey suggests that you are not without company.

According to a press release, the survey, conducted by CareerBuilder, indicates that 40 percent of the 3,892 surveyed U.S. workers live paycheck to paycheck. While this figure may seem high to some, it is actually a recession-era low: Forty-two percent of workers lived paycheck-to-paycheck last year, which was still lower than the 46 percent of people who did so at the peak of the recession in 2008.

"Making ends meet remains a challenge for millions of households, but the situation has improved for workers who've grown more confident with their job security or who've taken steps to pay down debt and save more," Rosemary Haefner, vice president of human resources at CareerBuilder, said in the press release. "Seventy-two percent of workers report they are more fiscally responsible since the end of the recession, and as the labor market continues to improve, we expect more workers will again be able to spend in ways that will drive the economy forward."

Not all data indicated an improvement in fiscal responsibility, however. As noted by Kapitall Wire, more than a quarter of Americans cannot manage to save any money on a monthly basis. Of those who can, most (17 percent) save $50 or less each month; only 10 percent are able to save more than $1,000. Sixty-seven percent note that they are still able to contribute to a 401K or other retirement plan, though a fifth say they have had to reduce their contributions in the last year. Workers age 55 and older are most likely to contribute to a retirement plan (73 percent).

"Here Are The People Most Likely To Live Paycheck To Paycheck," businessinsider.com, August 20, 2012, Vivian Giang