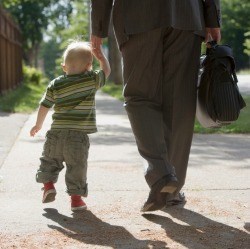 To say the number of working moms grew over the last century and a half would be an understatement. LiveScience reported that according to a new analysis of Census data by genealogy website Ancestry.com, the proportion of working moms in the United States skyrocketed by 800 percent since 1860. Gains do not necessarily indicate equality, however: A new Mother's Day survey from CareerBuilder found that though more moms have segued into the workforce -- and comprise an unprecedented share of sole breadwinners -- they face persistent disparities in earnings and career advancement. Nonetheless, working moms tend to more satisfied with their jobs -- and employers are beginning to see value in full-time parenthood.

The CareerBuilder survey analyzed how earnings, job titles and job satisfaction compare between working mothers and fathers, and according to a release published on the firm's website, women still face a disparity on several fronts. For example, working dads who are the sole breadwinners for their families are four times more likely to earn six figures than working moms who are sole financial providers. The survey also found that though female breadwinners are just as likely to hold managerial positions as their male counterparts, they are also more than twice as likely to hold administrative or clerical roles.

Not all survey results were bad for women, however. According to the results, working moms report being more content with their jobs overall than working dads -- 78 percent compared to 73.

Another bit of good news from the survey results: Taking a break from work to be a stay-at-home parent may not carry the same stigma it once did. The press release noted that the majority of employers (65 percent) now believe that being a stay-at-home parent can supply relevant skills for the workforce, such as multi-tasking, time management, conflict management and solid problem-solving skills. Though LiveScience reported that women are still much more likely than men to be full-time parents, the skills benefit applies to both sexes.

"Moms and dads are on a 24-hour shift, seven days a week," CareerBuilder Vice President of Human Relations Rosemary Haefner said in the press release. "The skills you develop as a parent to teach, troubleshoot, manage multiple priorities and arbitrate are very transferable to corporate environments. If you're a parent getting back into the workforce or first joining it, incorporate what you learned from those work experiences at home."

What does all of this say about working parenthood and a national push for better work/life balance? That there is still work to be done. In a separate article she penned for AOL Jobs, Haefner said that though employers are beginning to embrace work/life balances overall, working moms and dads continue to sacrifice. Starting a family while managing a professional workload requires both workers and employers to make adjustments. According to Haefner, new parents need to be frank about their needs with employers, and employers must encourage this dialogue and find ways to accommodate those changing needs.

"Working Moms And Dads: The Divide Between Salary And Job Titles," jobs.aol.com, May 8, 2014, Rosemary Haefner, http://jobs.aol.com/articles/2014/05/08/working-moms-and-dads-the-divide-between-salary-and-job-titles/