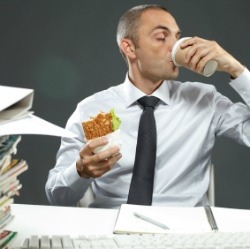 Have you ever wondered whether other workers are more or less productive than you? If they are just as likely to skip breakfast, or have also had an office romance? A new survey addresses these questions, and much, much more.

The survey published last week by the job search website CareerBuilder reveals a snapshot of the average American worker. According to a press release published on PR Newswire, nearly 4 thousand regular, full-time workers participated, answering questions ranging from what they eat for breakfast to how much time they spend actually working each day.

It all begins with breakfast, though not everyone opts to eat it: United Press International reports that nearly a quarter of respondents said they skip the meal entirely. For those who do eat, cereal is the most popular dish of choice (31 percent) followed by fruit or eggs (19 percent) and oatmeal (18 percent).

According to the Chicago Business Journal, most workers (43 percent) then put on business casual attire, though 33 percent choose jeans, and 21 percent uniforms. Only 4 percent of workers wear business suits. Once they are ready to go, the vast majority of workers (83 percent) commute to work in cars; 5 percent ride trains and 3 percent ride the bus. Once at work, the press release reports that 51 percent choose to take the stairs. In fact, a full 14 percent climb more than 5 flights of them to get to their desks.

As for how they spend their off-hours, 38 percent of respondents say they have actually dated co-workers. Of those who have had office romances, 12 percent say the romance was kindled at an after-work happy hour -- an event 40 percent of workers say they have attended. CareerBuilder even asked respondents what they choose to drink at the bar, and found that beer (35 percent) and water (31 percent) were the beverages of choice, followed by soda (29 percent), mixed drinks (25 percent) and wine (13 percent).

According to PR Newswire, the CareerBuilder survey was conducted online by Harris Interactive in November, 2012.

"CareerBuilder Looks at Office Life by the Numbers," prnewswire.com, March 14, 2013