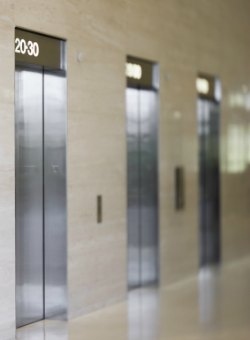 Pantsing. Fist fights. Uninitiated dancing. This may sound like a fraternity pledge's to-do list, but according to a new survey, these are actually just a few of the most bizarre and annoying behaviors U.S. workers have spied while riding office elevators.

In what could be used as a guide to what not to do in the workplace, a new CareerBuilder survey reveals some of the most unusual and annoying behaviors that happen on company elevators. The study, which surveyed more than 3,800 workers nationally, was conducted online by Harris Interactive.

Among the most bizarre behaviors reported in the survey, as reported by Human Resources Journal: The "pantsing" of another rider, which is when one person pulls another person's pants down, undoubtedly to their embarrassment. Other unusual sightings included changing a baby's diaper, teeth flossing, fingernail clipping and dancing throughout the ride. Fist fighting, showing someone a rash and asking for a diagnosis and moving the entire contents of one's cubicle on a single trip also made the list.

CareerBuilder notes that it also surveyed participants to find the "most annoying elevator habits" they have endured. The results included behaviors such as not holding the door open for would-be passengers rushing to get on (33 percent); standing too close to a fellow passenger despite having plenty of open space in the elevator (32 percent); squeezing into an already packed elevator (32 percent); and not stepping off the elevator to let other people off (27 percent).

Perhaps surprisingly, passing gas or couples making out on the trip did not make the list.

While participants had plenty of fodder to report when discussing unusual elevator behavior, not all of them were shining examples of proper elevator riding etiquette. CareerBuilder reports 16 percent of workers admit to purposely closing the elevator door when they see someone approaching.

According to the Examiner, the study also revealed that elevator rides are a source of anxiety for the 16 percent of respondents who fear getting stuck during transit due to a malfunction. Human Resources Journal notes that this is a "reasonable dread, considering the types of people that join them on the elevator."

"Going Up? That May Depend on Which Co-Workers are Taking the Elevator," humanresourcesjournal.com, August 10, 2012