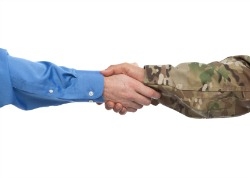 A CareerBuilder survey shows that some employers are looking to increase the numbers of military veterans they hire and may even prefer bringing them on board over non-military candidates. Employers are finding the technical and leadership skills many veterans possess are useful in filling open positions in customer service, information technology, engineering and sales, reported Business News Daily.

According to a CareerBuilder press release, more than 2,600 U.S. hiring managers and professionals were surveyed from August 13 to September 6 for the study. Twenty-nine percent said they were actively recruiting veterans while 22 percent were looking to bring on members of the National Guard. Both of these were increases from last year's responses of 20 and 14 percent, respectively. More surprising may be the fact that 65 percent of employers said they would be more likely to hire a veteran over another equally-skilled candidate, noted Life Inc.

Those who favor hiring veterans say they bring a number of skills to the table including loyalty and the ability to perform under pressure. Employers may also benefit from the positive publicity that comes from placing veterans on their staff.

"Today's military is a well-educated, professional, all-volunteer force," Elaine Howard, president of the publishing firm responsible for Military Times, said in the press release. "So when troops join the civilian workforce, they bring with them skills, discipline and unmatched drive."

However, the path to employment may not always be easy for young veterans returning from Iraq and Afghanistan. According to Life Inc., the October 2012 unemployment rate for veterans who had served since September 11 was 10 percent, which was higher than the national unemployment rate.

One problem veterans may face is how to obtain a job after leaving the service. The study showed that 30 percent of employers had difficulty discerning whether a job candidate was a veteran because it wasn't always clear on their application, according to Business News Daily. Some veterans may also need help creating a resume or preparing to interview for a non-military job, according to Life Inc. Other veterans may find that some military skills, such as driving a military truck, aren't easily translatable to a civilian job. As a result, many veterans invest time and money earning degrees or certifications before even applying for work.

"...[N]avigating the job search and translating military skills into civilian terms has always been a challenge," Howard said in the press release.

To help with the job search, CareerBuilder recently partnered with Military Times to create a career site specifically geared towards service members and veterans. Jobs can be searched by company, industry and location, and users can post up to five versions of their resume.