CareerBuilder Survey Shows One Third of U.S. Workers Have a Younger Boss 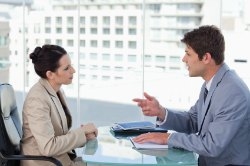 American companies have long valued seniority, promoting longer-standing workers into managerial positions that allow them to oversee and mentor younger, less-experienced colleagues. According to a new survey, however, this may be changing. In fact, there is a reasonable chance that your boss is actually younger than you, and that this shift can have a significant impact on office relationships and culture.

Job search site CareerBuilder has published a new survey that highlights an emerging generational divide in the American workplace. According to a press release, about a third of U.S. workers have bosses younger than them. In some cases, this age gap can be significant: 15 percent of respondents work for bosses 10 years or more their junior.

"Age disparities in the office are perhaps more diverse now than they've ever been," said Rosemary Haefner, vice president of human resources at CareerBuilder, as quoted in Fox Business. "It's not uncommon to see 30-year-olds managing 50-year-olds or 65-year-olds mentoring 22-year-olds."

While this trend may seem like little more than a demographical shift, it actually could have a major impact on office culture, especially with respect to workplace tone and pace.

"While the tenants of successful management are consistent across generations, there are subtle differences in work habits and views," Haefner said in the press release.

For instance, according to Forbes, younger bosses are more likely to communicate with their employees by e-mail or text while older workers prefer phone or face-to-face communication. Meanwhile, Fox Business reports that younger bosses foster a "seize any opportunity" mindset, which translates into a push for more frequent promotions and a greater willingness to change jobs in less than three years. In fact, nearly half of bosses age 25 to 34 believe you should only stick with a position until you have learned enough to move ahead. Colleagues age 55 or older, on the other hand, look through a more traditional "employee-for-life" lens.

"Overall, these findings indicate that millennials are more impatient about advancement or moving, they're more open to flexible work schedules, and more methodical in their work…" wrote Forbes's Jacquelyn Smith.

While these philosophical differences could occasionally create clashes among workers, Haefner contends companies will benefit from them in the long-run.

"Certainly there are short term challenges when the various styles mix," said Haefner, as reported by Forbes. "However, in the long term, the differences can be a positive asset for a company as those situations teach employees how to deal with change."

According to the press release, the survey was conducted online by Harris Interactive on behalf of CareerBuilder. Respondents included U.S. workers and hiring managers age 18 and over.

"Brace Yourself, Your New Boss May be Younger Than You," foxbusiness.com, September 14, 2012, Jennifer Booton

"How Millennials Work Differently From Everyone Else," forbes.com, September 13, 2012, Jacquelyn Smith