CareerCast Lists the Most Stressful Jobs of 2013 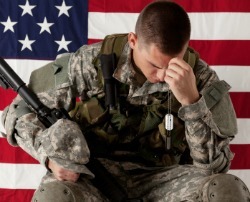 Enlisted military service makes the top of the list of the 10 Most Stressful Occupations for 2013, according to CareerCast, an online job search site. Eleven criteria were used to rank the most stressful jobs. These criteria included, among others, being put in physical danger, risking one's own life, being responsible for the lives of others, and being under close public scrutiny, according to ABC's Channel 5 News.

"There are different types of stress," Tony Lee, publisher of CareerCast.com told NBC News. "It can be physical danger. Actually being in harm's way. There can also be stress that's deadlines, competitiveness and being in the public eye."

Workplace stress is a common and well-known problem. In fact, the recent stress survey that was conducted by Harris Interactive for Everest College showed that almost three quarters, or 73 percent, of employees experience stress over at least one thing at work. However, according to CareerCast, enlisted military personnel (median salary $45,528) have the most physically demanding jobs and must deal with long hours and distance from home, making their occupation the most stressful in the U.S. Military personnel also have to re-enter civilian life upon their return from service, a transition that is often very stressful. Being a general in the military (median salary $196,300) ranked as the second most stressful job. These individuals have all the stress of enlisted service-members, but are also responsible for the lives of their troops.

"Sending troops into battle - you have to live with it if it costs lives," Lee told NBC News. "Nothing else can measure up to that."

Third on the list were firefighters, who risk their lives when they respond hazardous emergencies. Due to the nature of their job, firefighters experience quick bouts of stress, which research shows has more impact than steady stress. Fourth on the list are commercial airline pilots (median salary $92,060), who can spend long periods of time away from home and are responsible for the safety of passengers and flight attendants.

Taxi drivers (median salary $22,440) took the ninth spot. These workers deal with difficult hours, low pay, and potential danger. Out of all employees, taxi drivers are most likely to be robbed. Finally, in the 10th spot are police officers, who have a stressful job simply because of the danger inherent to their work. They often enter situations that have unknown variables and frequently risk their lives. They must protect the citizenry and uphold the public's standards for them.

"One man's stress is another man's job," Lee said. "Some are adrenaline junkies. Some thrive off stress. A firefighter may really enjoy running into burning building to save somebody."