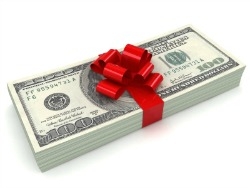 As the holidays approach, millions of U.S. workers are hedging their bets on what kinds of holiday perks might be headed their way. However, one perk does top their minds, according to a new survey just released by jobs and career site Glassdoor, and that's a cash bonus, as reported by Today.

Of the 2,059 U.S. adults queried for the survey in November by Harris Interactive, 73 percent said they would prefer a cash bonus over anything else. This marks the second year in a row that this holiday perk has come in tops on the survey. Next in popularity was a pay raise, ranked by 60 percent as a top preference, followed by paid time off that doesn't count against accrued vacation, ranked by 36 percent. Put lower on the list were offerings of company stock, health care subsidies, and gym memberships.

The same survey also included results about work-related resolutions made by employees for 2013, according to a press release published on Market Watch. Those employee-inspired resolutions varied: 32 percent said receiving a raise was their top resolution; 23 percent said they aimed to find a new job; and 21 percent hoped to improve a performance rating by a supervisor. Lower-ranking goals included attending work-related training, using all earned vacation days, and socializing with work colleagues more often.

Rusty Rueff, Glassdoor career and workplace expert, said the survey results reflected recent changes in the economy, namely that people are more comfortable returning as directors of their careers again.

"As employment confidence gradually improves, it's no surprise to see employees looking to wrest back control over their own destiny, which is why we see their focus on more money, a new job or a fresh commitment to their on-the-job performance," said Reuff. "But good economy or tough economy, adequate and expected take home pay is always top of mind and employees are sending a clear message that they want this most -- not only during this holiday season, but next year too."

Perhaps a growing disgruntlement with pay inequity is also resulting in the employee push for more money: in reviewing the Glassdoor survey results, Forbes noted that employee dissatisfaction with their pay, especially when compared to executives, is on the rise. Forbes reported that the difference between CEO and employee compensation in the U.S. is the largest in the world, and that CEOs make 380 times the salary of the average worker.