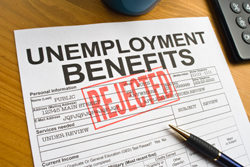 Despite the millions of Americans still without jobs, some states are cutting back on unemployment benefits.

According to CNN Money, some states want to cut back on jobless benefits in order reduce the unemployment taxes businesses pay. State officials believe that these taxes, which have increased during the Great Recession, may be deterring companies from hiring.

As JSOnline pointed out, employers in 36 states saw unemployment insurance tax increases ranging from just dollars to as high as $1,000 per worker. Six states are already taking steps to reduce or freeze jobless benefits.

Jacksonville.com reported that in Florida, for instance, businesses pay $72.10 per worker for unemployment insurance rates. In 2010, that cost was only $25.20.

"It's a disincentive to move to the state of Florida with a new business or for a business that's here to expand if they have to pay all this money per employee," said Rep. Doug Holmes as quoted by CNN Money. Holmes sponsored a bill, which would cut unemployment benefits in Florida down to 20 weeks and reduce the tax hike for businesses by approximately $18 per employee. Once the state's unemployment rate drops to 5 percent or less, the unemployed will only be entitled to 12 weeks of benefits.

Meanwhile, in Arkansas, legislation that would cut benefits by a week and also maintain the current maximum of $451 passed the state Senate and is now being considered by the House. The bill is expected to save up to $75 million a year.

Indiana Gov. Mitch Daniels recently approved a bill that will limit eligibility for jobless benefits. Temporary workers and those on extended leave will no longer qualify for unemployment insurance. Workers on planned short-term shutdowns and those who take voluntary buyouts will also become ineligible. Furthermore, the new law will lower unemployment taxes on businesses to $703 per worker, instead of $903. Last year, businesses were only responsible for $392 per employee.

CNN Money noted that this is not the first time states have resorted to reducing benefits. During the 1980s recession, more than 40 states were forced to cut benefits and reduce eligibility. Back then, states took out $28 billion in loans, when adjusted for inflation, to cover unemployment benefits. In comparison, today some 32 states owe $45.7 billion to the federal fund and may have to pay about $1.4 billion in interest this year. Much of this burden will fall on businesses as they will have to pay higher unemployment taxes.