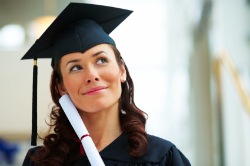 For the first time, a higher percentage of American working women have college degrees than their male counterparts, reported USA Today.

The difference in degree attainment was even greater among those in their mid to late twenties--among those 25 to 29, 36 percent of women held a bachelor's degree or more, while 28 percent of men reached the same level.

Reuters, however, pointed out that it was a slightly different story when looking at the entire adult population. Among those 25 and older, including those unemployed, 30.3 percent of men had a four-year degree compared to 29.6 percent of women. Overall, the percentage of adults 25 and older with bachelor's degrees has increased through the years--as of 2010, 30 percent of adults had a four-year degree, which is up from 26 percent in 2000.

According to the press release, the report not only examined gender differences in degree attainment but also provided detailed information on exactly how many years of education adults have.

"The tabulations permit one to see not only the broad levels of educational attainment adults experienced, but also, for instance, if they did not receive a high school diploma, the specific level of schooling they did reach," explained Sonia Collazo, a Census Bureau demographer.

The report also provided attainment statistics for different ethnic groups. Fifty-two percent of Asians 25 and older earned a four-year degree or more, compared to 33 percent for non-Hispanic whites, 20 percent for African Americans and 14 percent for Hispanics.

Data for the report was collected through surveys of approximately 100,000 households in February, March and April.