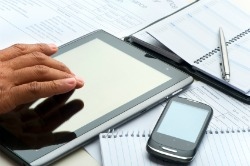 More and more companies are allowing employees to bring their personal devices to work and use them on the job, despite concerns about security and even extra costs that might be incurred.

Of the 600 U.S. information technology and business executives responding to a Cisco Systems, Inc. survey, nearly all (95 percent) said they permit employees to bring personal devices to work. The study also showed that 84 percent of companies even provide some kind of tech support for these devices, according to Reuters.

Many companies offer these services through bring-your-own-device, or BYOD, type programs. Even Cisco, a networking systems company, allows its employees to bring their own devices to work. The most frequently taken-in devices include smartphones, tablets and laptops, the study showed.

"As the number of devices being brought into work increases, organizations need a comprehensive mobility strategy," said Padmasree Warrior, senior vice president and CTO for Cisco, in a statement quoted by eWEEK. "By leveraging the intelligent network, organizations can now provide their employees with the benefits of working anywhere, any time: in other words, 'work your way.'"

The study also showed that BYOD programs can be advantageous in other ways: companies can save from $300 to $1,300 per week per employee depending on position, eWEEK noted. Although it's not clear what form those savings come in, it seems that BYOD programs allow for increased desktop virtualization which gives workers better ability to streamline their work flow and processes.

BYOD programs could be advantageous in additional ways. Seventy six percent of respondents said BYOD was somewhat or extremely positive for their workers and companies overall, according to Cult of Mac. Forty percent of respondents said these types of programs give employees increased flexibility in choosing their own devices and apps. BYOD programs also allow employees to manage their personal activities in the workplace as well as work at nontraditional times.

BYOD programs do present challenges, however, with at least 75 percent of respondents indicating so. Key issues include maintaining corporate security and privacy as well as providing support for various mobile platforms.

The study is relevant because more and more workers are using technology on the job and more attention is being given to the inclusion of personal devices. For example, some 78 percent of the nation's white collar workers now use a mobile device while 65 some percent need mobile connectivity to work. Currently, the average number of devices a knowledge worker uses is 2.8, but that is expected to rise to 3.3 by 2014, eWEEK noted.