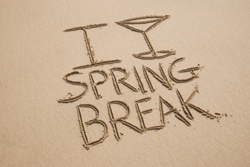 With spring break just around the corner, tourism officials have been busy promoting popular destinations on college campuses.

According to The Wall Street Journal, tourism officials from Panama City Beach, FL have been visiting campuses all over the Midwest to attract snow-struck students. This is a big shift from 18 months ago when the city discouraged spring breakers because they scared other business away. However, after the Deepwater Horizon oil spill, Gulf Coast communities are hoping that the once infamous spring break will now bring in some much needed revenue.

Many Gulf Coast cities are popular destinations for college spring break. For example, in Panama City Beach, March is the third biggest tourism month. The city has often seen some 300,000 students during spring break and usually brings in about $101 million. Pensacola, FL is another top pick, but has recently seen a decline in lodging revenue.

"Spring break is especially important this year," said Laura Lee, spokeswoman with Visit Pensacola. "Normally if we have a strong spring break, it is followed by a strong summer season, so it's a good barometer."

According to KPSP Local 2, tourism officials in Palm Springs, CA are also hoping to attract college students from California and Arizona. Officials have been promoting on Facebook and Twitter and have launched street teams to pass out flyers.

However, while many hotel owners and businesses see college students as the golden ticket, some are not as thrilled to deal with the traffic, noise and drinking.

"They get drunk, they can destroy your room or hotel," said Frank Tysen, owner of Casa Cody in Palm Springs. "I don't want to discourage families from being there during that time."

The Wall Street Journal pointed out that many on the Gulf Coast share the same sentiment. Although Panama City Beach officials say the city needs spring breakers more than ever, they still want visitors to see the area as a family-friendly location.

"Spring break does not define Panama City Beach," said Dan Rowe, president and chief executive of the Panama City Beach Convention and Visitors Bureau. "We have to continue to reinforce the fact that college spring break happens in March. They [students] have a great time and they go home."

While many college students are making beach party plans, the M-Times online noted that some students are taking advantage of Alternative Spring Break programs. Through such programs, students can volunteer with organizations such as Habitat for Humanity, YWCA, Big Brother Big Sister and Wellness Aids. At the University of Michigan Flint, for instance, 75 students will be volunteering to help out in shelters, build homes or mentor children.

"I wanted to do something meaningful during my Spring Break," said Erika Trigg, freshman at UM Flint. "Sure, it'd be great to hang around like a couch potato for a week, but I would rather be out there doing something for someone else."