City College of San Francisco Will Not Close Its Doors 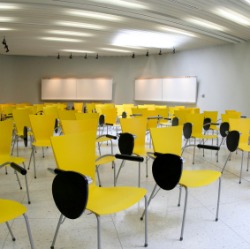 When the City College of San Francisco learned last year that financial mismanagement and other problems would cost it its accreditation and force it to close its doors by July, 2014, the college vowed to fight for its 85,000 students in court. It seems those legal efforts have paid off -- at least for now.

A San Francisco Superior Court judge has granted a partial injunction to block the Accrediting Commission for Community and Junior Colleges from stripping CCSF's accreditation until after a lawsuit filed by City Attorney Dennis Herrera is resolved. According to a news release published by Herrera's office, the move grants the college -- and its thousands of students -- a temporary reprieve from closure.

Herrera filed the legal challenge against the ACCJC last August, which included a motion for injunction, reports Inside Higher Ed. The suit claimed that political bias, conflicts of interest and procedures improperly influenced the commission's evaluation. The ACCJC called the legal challenge "meritless." Nonetheless, the judge granted CCSF a partial injunction, suggesting he believes serious harm could occur before the lawsuit is decided.

"There is no question… of the harm that will be suffered if the Commission follows through and terminates accreditation as of July 2014," said Judge Curtis E. A. Karnow, as reported in Herrera's release. "Without accreditation the College would almost certainly close and about 80,000 students would either lose their educational opportunities or hope to transfer elsewhere," which may not be "realistic."

"We're incredibly pleased with the outcome," Herrera told the San Francisco Chronicle. "We're hopeful the (commission) will take heed in the future and evaluate colleges in a fair manner with no conflicts of interest."

Faculty members and students seem just as relieved by the ruling.

"I'm feeling good about the decision," Shanell Williams, an activist with the Save City College Coalition, told The Chronicle. "Students have been feeling a lot of frustration, like there was this train speeding down the road, and we felt, like, how can we stop it?

The chancellor for the statewide community college system appeared less enthused about the ruling, however, and also about the perception that CCSF was truly on the brink of closure.

"Court intervention is not necessary to keep City College open," Harris wrote in a letter to Herrera acquired by The Chronicle. "Characterizations that the cases before the court are a 'last-ditch' effort to 'save' City College are inaccurate and will do additional damage to the college's enrollment."